Not Hiding: SOU Student Film Junk is 360-degree Look at the Opioid Epidemic 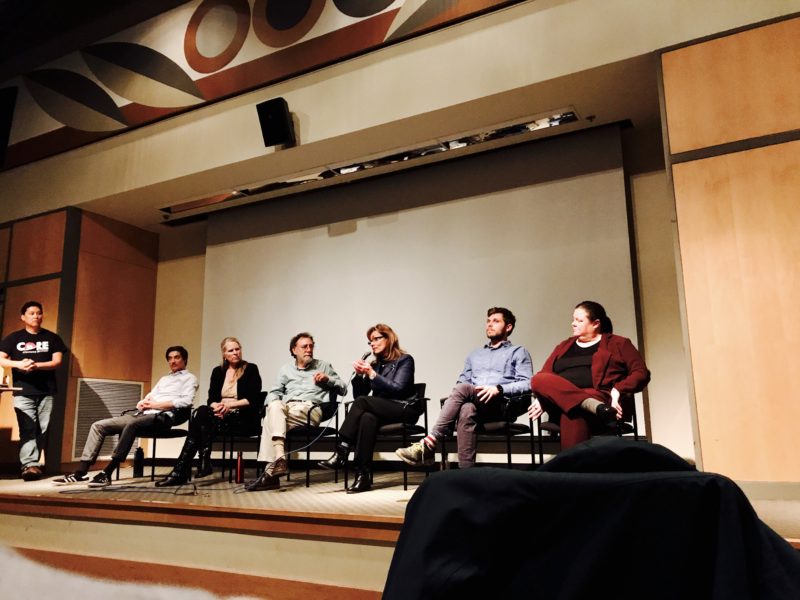 On April 11, a diverse audience crowded into Meese Auditorium at Southern Oregon University for a screening of Kyle Simpson’s student short Junk, and a panel discussion on the opioid crisis in the Rogue Valley. The size and composition of the crowd testified to the broad reach of this epidemic in our region and beyond. Simpson’s film offers the audience an eye-opening introduction to the problem, exploring the causes and costs of opioid addiction through the eyes of a young man who has faced the disease of addiction and survived.

In some moments, Junk feels remarkable simply because it exists. After Simpson’s descent into opioid addiction, he was expelled from SOU and soon got in trouble with the law. He entered residential treatment and has been sober for the last three years. Recommitting to his education, he graduated from SOU last fall. Junk is the outcome of Simpson’s capstone project, a two-term, research-driven study required for graduation, during which a student digs into a topic of their choice.

This fact-finding mission is reflected in the film. Simpson blends news reports with first-person footage of his life as an SOU student, alongside interviews with doctors, social workers, law enforcement, and family members of addicts, living and deceased. Organized into thematic chapters like “Pain,” “Punishment,” “Treatment,” and “The Children,” the film portrays the complexity of our opioid problem: the impact of powerful new drugs and medications (with powerful marketing from pharmaceutical companies); youth dealing with a culture awash in addictions; harsh drug penalties, and the lack of quality treatment options outside of the prison system.

The post-film panel included Simpson along with Laura Heesacker, a licensed clinical social worker; Dr. Jim Shames, Jackson County medical director; Lee Ayers, Professor of Criminology at SOU; Patrick Devlin, program director for Dragonfly Transitions; and Judge Lisa Greif of Jackson County Circuit Court. The panelists encouraged the audience to pull addiction out of shadows of guilt and empty moralizing to find workable solutions. The scope of the problem can be staggering. As the New York Times has recently reported, the number of drug overdose deaths has risen more than 500% since 1990—in some years killing more people than car accidents and gun homicides combined. The age group 15-to-44 accounts for most overdose deaths, and in Southern Oregon and Northern California counties, drug overdoses in that age range cause between 13-20% of all deaths.

Victor Chang, Director of Counseling at SOU, and coordinator of the school’s Collegiate Recovery Program, was an advisor on the film. “Kyle embodies someone who is not ashamed to reveal his vulnerability, being a person in recovery and having abused heroin and other drugs. I admire his strength and courage, being open with peers and acquaintances,” Chang says. College students face unique challenges when it comes to addiction and recovery. Intoxicants, including alcohol and marijuana, are plentiful, and most students come to college with a sense of fresh independence and expectation that can lead them into addictive behaviors. And if a student is in recovery, Chang says, the challenge is greater—imagine trying to recover in a peer group or environment where drugs and drug abuse are a social norm. “College campuses,” he says, “are recovery-hostile environments.”

As for Simpson and his collaborators, they want to take the film out to screen for professionals that help others to recover, or avoid addiction in the first place. “Hopefully [the film] helps people understand addiction,” Simpson says. “Even if, by nothing else, bringing awareness of the fact that this is an issue. This problem exists. It touches so many people and doesn’t discriminate on your age, gender, background or social upbringing.” If the size of the crowd at Meese Auditorium is any indication, he’ll find an eager audience.

Not Hiding: SOU Student Film Junk is 360-degree Look at the Opioid Epidemic