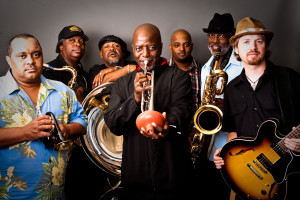 New Year’s Eve is rarely short on parties. But the biggest, brassiest one happening to close out 2015 in Southern Oregon, is going down at The Historic Ashland Armory, with New Orleans icons The Dirty Dozen Brass Band making it clear which old friend ought not be forgot: those that know how to dance the night away.

And by now, the Dirty Dozen Brass Band has got the New Year’s Eve routine down. After all, the band has been at it since 1977.

“I don’t know where the time went,” trumpet player Gregory Davis said in the band’s bio. “I guess it’s just the music, man, you don’t be thinking about all that.”

Davis credits the group’s longevity to its chemistry. But chemistry only keeps a band working on the inside. It’s gotta bring something special to the listeners as well in order to last that long. What Dirty Dozen Brass Band brought to the table was a broader take on what the brass band could be.

“We started out as a traditional New Orleans brass band,” says Davis. “In the beginning we weren’t getting work of any kind, so we thought it was okay to explore other music. That allowed us as individuals to bring ourselves into the rehearsals and that’s where we started to experiment.”

Davis, then a student at Loyola University, brought influences from modern jazz and funk players, but imbued their arrangements with a New Orleans spin.

“It’s impossible to think that you can be exposed to the harmonies that Duke Ellington was making, the rhythms coming from Dizzy Gillespie or the funk being done by James Brown, and then ignore it when you’re playing New Orleans music,” he says. “New Orleans music is all of that. If we had chosen to just put in the music presented to us then as traditional, it would have stunted our growth. Being more than what we heard is what the band was about.”

Expect Dirty Dozen’s New Year’s party to be packed with boisterous arrangements of NOLA staples like “When the Saints Go Marching In,” as well as jazz and funk originals and brassed-up covers of pop hits like Rihanna’s “Don’t Stop the Music.”

“As we continue to do live shows, the challenge is still going to be, how am I going to entertain these people that are in front of me tonight?,” Davis says. “You have to make that happen at the moment, and that’s what we do best.”