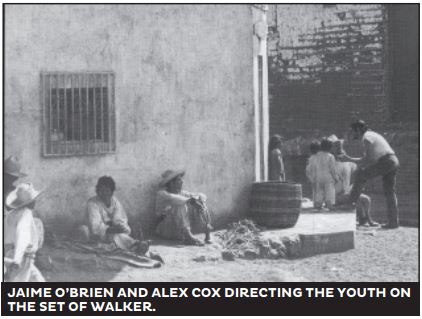 Like any true maverick, film director and writer Alex Cox is not easy to pin down. His movies are difficult to categorize, gleefully and absurdly borrowing icons, ideas and images from different eras and genres. At the most recent Ashland Independent Film Festival, a recent production of his, Tombstone Rashomon, plots a film crew as time travelers back to OK Corral to capture the famed shoot-out, only to arrive a day late and be forced into a different role as detectives.

Likewise, the movie that Cox has often cited as his best, Walker, follows the story about a 19th century American mercenary, but drops anarchistic props left and right, like exploding cars. Cox directed Walker in the mid-80s after the critical success of Repo Man and Sid & Nancy, and reportedly turned down offers to produce mainstream films like RoboCop and Three Amigos so that he would be available for this much more esoteric project, and on Saturday, October 28, will present his film Walker, which includes a soundtrack by Joe Strummer, the former member of The Clash. The screening (with commentary from Cox, AIFF Program Director Richard Herskovitz and SOU’s Digital Media Center Production Coordinator Brandon Givens) caps off the Ashland Literary Arts Festival (4 – 6 pm, Meese Auditorium: Schneider Museum).

RVM: 1984 was a big year for Harry Dean Stanton. He had roles in films like Alien and Escape from New York. But that year really put him in different roles, with the lead in Paris, Texas (which won the Cannes Film Festival Palm d’Or that year) and, of course, as a central character Repo Man. How did you “find” him?

AC: I saw him in various films, including The Missouri Breaks, and thought he was a wonderful actor. He seemed very focused, credible, vulnerable, intelligent. When I was a graduate student at UCLA, a colleague who was also a waiter at a restaurant up on Beverly Glen told me that HD Stanton would drop in there occasionally, for a solo dinner.
We made a plan and he would call me in my apartment whenever HD dropped in. We’d estimate his departure time, and I’d ride over from Venice on my motorcycle and arrive just as Harry Dean was pushing back his pudding and calling for the check. I introduced myself, spoke highly of his work, and gave him a copy of the script of my student film, my phone number, and my fervent hope that he would act in it. He didn’t.
A few years later, we approached Dennis Hopper to act as Bud in Repo Man. Dennis was keen, but money was an issue, and so I revisited an actor whom my writing partner Tod Davies had met at a party: “He has that
old-time, skeletonly, American thing,” Tod told me. “He’d be perfect for Bud.”
And so he was! He went straight from the wrap of Repo Man to the shoot of Paris, Texas, with a week off in between.
RVM: Repo Man also was a critical film to launch Emilio Estevez’s career. He had been in Outsiders, but not yet a Brat Packer. Thoughts on his career subsequent to Repo Man?

AC: I’m not familiar with it. I saw the first Young Guns, other than that I can’t recall having seen any other of his films.

RVM: I find it fascinating that Michael Nesmith was an Executive Producer for Repo Man. How did that come about? Was it his connection to and interest in the LA music scene?

AC: Michael has had a remarkable life. He was a young country musician, picked to be part of a TV phenomenon called The Monkees. Like any respectable pop musician, he became a millionaire and bought expensive, classic cars. When The Monkees phenomenon was cancelled, he went bust, and all those classic cars were re-possessed by brutal thugs and wiley con-men, such as appeared in my script. I think he enjoyed this aspect, and also the musical focus of the punks—a scene he wasn’t familiar with, but which interested him. When his mother invented an office product called Liquid Paper/White Out, the Nesmith family were millionaires again. And he moved once more in circles that had money to make films. He became THE executive producer, and Repo Man was the fortunate result!
RVM: Like Repo Man, music is hugely important in Walker. Can you talk a bit about your relationship with Joe Strummer?
AC: A very talented musician and composer, and a very intelligent, political, nice man. His experiences in The Clash must have been of an extraordinary order, and he spent a long time finding his way back from that, looking for other venues for his extraordinary creative abilities: producing, composing, acting, starting new bands like the Latino Rockabilly War and the Mescaleros. I found him great to be around, and wish he had come to Mexico!
RVM: How did you find this story at the center of Walker?
AC: There’s a written reference to Walker and his burning of Granada on the wall of a church in that city. I was on a tour in Nicaragua, and stayed a few nights in Granada. The words stuck in my mind, and back in Los Angeles a very kind history professor, Bradford Burns, lent me his UCLA library card. So I began to read the books on William Walker, a forgotten historical figure who in his day was more popular and drew more media attention than the President. He invaded Mexico, joined one of the factions in the Nicaraguan civil war and made himself President. He then betrayed the American business interests which had backed his venture, and instituted slavery.
Once you hear this story, how can you not want to make a film about it, in collaboration with the Sandinista government and the Catholic Church?
RVM: Perhaps time-traveling is on my mind because the film, Tombstone Rashomon, you showed at Ashland Independent Film Festival, about a film crew that time travels back to the OK Corral shoot-out. If you could go back in time, are there any scenes in Walker you would change?
AC: There’s one scene where we forgot to emphasize Walker’s diminutive stature. In retrospect I would ask the other actor to sit on a cushion or an apple box, to enhance the difference in height.
RVM: You left England for LA in 1977, seemingly at the peak of punk music in England. What connections or interest did you have in any of the bands there at the time? (Obviously, it seems like The Clash and Sex Pistols, given how they have played into your career.)  Any concerts or bands that were particularly interesting to you?

AC: I lived in Los Angeles throughout that time, and really knew the LA bands much better than the English ones. 999 played in LA, and The Gang of Four, and the Jam, and I saw The Clash twice—once at the Santa Monica Civic and later in a football stadium, supporting the Who. But my real dedication (in terms of number to times seen, amount of vinyl acquired) was to Fear, X, the Plugs, Wall of Voodoo, the Weirdos, the Circle Jerks… Some shows were downtown in bars, often they were at the Starwood in West LA. After the Starwood shut down, we used it as a film location—all the smaller club interiors in the film were shot there.
RVM: You work with young filmmakers. If you just had one bit of inspiration or insight or direction you could give them, what would that be?
AC: Take care of your cast and crew, and feed them!