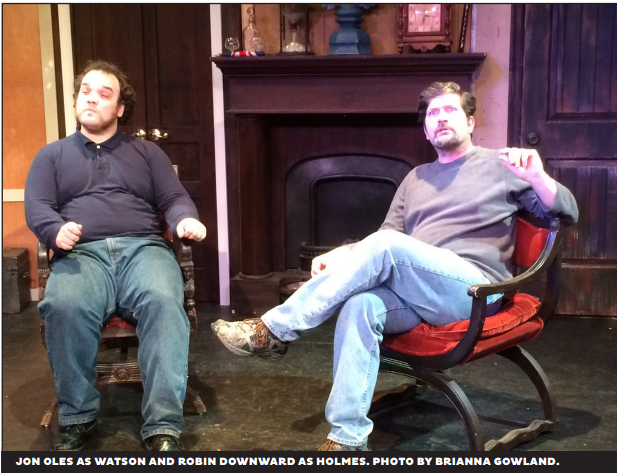 Fans have another full year to pine for Benedict Cumberbatch and Martin Freeman in BBC’s fourth season of Sherlock, so to help ease the waiting and separation—Randall Theatre in Medford is on the case; though with a much longer title, Holmes and Watson Save the Empire is playing through February 14 and promises to fulfill all that the original author Sir Arthur Conan Doyle intended in the characters, and adds music with a good dash of comedy.

“It is a different take on the Holmes and Watson story,” says Director Brianna Gowland. “There is a lot more comedy to it. There are going to be a lot of things different from the TV show, but it is definitely worth seeing.”

In her directorial debut at Randall Theatre, Gowland says that the opportunity “came about by accident,” but she is excited for the challenge. She graduated from North Medford High School in 2012, where she did some directing for the school’s productions, and she has assistant directed and been on stage at Randall in the past. She was slotted to co-direct this play with the Randall’s Artistic Director, Robin Downward, who also happens to be playing Sherlock Holmes.

“Then he just gave it to me to direct,” says Gowland. “It has been intimidating, but I am so thankful. I thought it was going to be super scary, but he has let me have my vision and he goes along with me.”

The minimal three-person cast won’t be the typical “Clue” murder, with the audience analyzing many characters to find out whodunit, but rather an intricate plot following Sherlock Holmes through his deductions. Gowland says that in spite of the shortest rehearsal period of the season, the three are ready for the curtain to go up.

The play was written by Ashland couple Jahnna Beecham and Malcolm Hillgartner, and the unveiling at the Oregon Cabaret Theatre in 2011 was met with great reviews. Gowland says that even if you saw it then, it is worth checking out again.

“A lot of things have changed and evolved since it played at the Cabaret,” she says.

She admits that she started to read the original stories by Doyle to research for the play, but didn’t finish them. However, Jon Oles, who plays John Watson, has read them in their entirety.

“We ask him if we have any questions,” chuckles Gowland.

The Randall Theatre is unique in the Valley, in that 30 minutes prior to the start of every show, all remaining unsold seats are up for grabs, and you set the price.

Holmes and Watson Save the Empire