Home»Sound»Music News»Music as the Vessel: Indubious Plans to Get Indubious at the Ashland Armory
Music News/Sound

Music as the Vessel: Indubious Plans to Get Indubious at the Ashland Armory 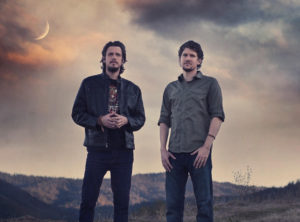 What’s rootstronica, you may be wondering?

“It’s an embracing of the modern elements of electronic music,” says Indubious member Evan Burton, “which is sonically rich and contemporary…with the spiritual subject matter and energy and love of roots reggae music.”

Fri., November 11, Indubious will define the musical genre further at the Ashland Armory.

Brothers Spencer and Evan Burton were born with Cystic Fibrosis, meaning they weren’t expected to live past their teenage years. Now in their thirties, the brothers use music to express their perseverance and optimistic outlook on life.

“Reggae is a music that has come out of suffering…from the slums of Jamaica,” says Burton. “I think that speaks to everyone in their soul, because we all have hardships. For us, the music has embodied pure hope…It makes us feel alive…The music is just a vessel. It’s what the vessel is carrying––and for us, the vessel is caring love and hope and unity.”

The brothers were exposed to reggae at an early age, and have been inspired greatly by legends like Bob Marley and the Beatles. Their music is certainly upbeat and jam-worthy, with an unmistakable positive spirit found in every song. But they don’t try to force it.

What is that greater thing? “love and hope,” says Burton.

He is particularly excited about the show in Ashland because it’ll be their first one with a full band at this venue.

“[We’re] trying to return to our roots and bring back the vibe that we’ve had for a long time with our favorite group of fans in Ashland,” he says.

The band has had the opportunity to share their positive music with a festival in India, which Burton describes “as close you can get to a totally alien planet. What really struck us was how kind and gracious and grateful everybody was.”

At the show on Nov. 11, the audience will hear new, unreleased music sure to get them to do more than tap their feet to the beat. Burton explains how special the show is to them because it takes place on 11/11, a symbolic number to them. He says, “It’s a symbol of being guided and being in the right place at the right time.”

Being at the Ashland Armory on Nov. 11 with Indubious will sure be the right place at the right time.

Music as the Vessel: Indubious Plans to Get Indubious at the Ashland Armory