Most Memorable Racing Moments from Daytona

Known as the Superbowl for car racing, the Daytona 500 is an unmissable event for all racing fans. Held annually at Daytona Beach in Florida, Daytona is the first of the NASCAR racing events of the year, which builds the anticipation even more!

Unlike other sporting events where the championships are usually held at the end of a season, the NASCAR Cup Series offers Championship points at the beginning of the year, which are equal to any other race points in the series. So, if you’ve just watched the Daytona 500 for this year and want to look back on some highlights from previous years, or you’re just getting started with all things racing, then keep reading below! 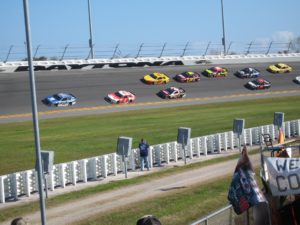 Undoubtedly an iconic year for racing, the 1977 race is memorable because it featured the first female driver ever to take part in the race – Janet Guthrie. She drove the No. 68 Chevrolet and finished in 12th place, and later went on to finish in 11th place in 1980.

This was the year in which the Daytona 500 became the opening race in the NASCAR line of races and is a position it holds even today. Bobby Allison was the first-ever driver to win both the Daytona 500 and the Bisch Light Clash, but it did not come without controversy. Allison lost his rear bumper on lap 3, because of which he gained an aerodynamic advantage, as well as causing a pileup behind him.

1985 was an especially significant year for Bill Elliott who became known as ‘Million Dollar Bill’ from then on because he was the very first winner of the Winston Million program. The criteria to become a winner included a racer to win three out of four Grand Slam races – the Daytona 500, Southern 500, and Talladega 500. Elliot won the Daytona 500 by a mile by leading 136 of 200 laps!

A rather dark moment in the history of the Daytona race, 2001 marked the year in which Dale Earnhardt sadly died in a car crash on his very final lap. The day is often commonly referred to as ‘Black Sunday.’

The unfortunate death of Dale Earnhardt understandably meant that Michael Waltrip’s win wasn’t highlighted, so 2003 was when Waltrip became a two-time winner, earning his second victory. The race was significant as it was shortened to 109 laps due to heavy rain, making it the shortest Daytona 500 ever.

2008 marked 50 years since the Daytona 500 started, giving NASCAR an opportunity to freshen things up a little. In celebration of its 50th anniversary, the Daytona International Speedway gave out a gold Harley J. Earl trophy, and it also marked the very first race under the Sprint Cup Series banner!

Marking 10 years since the fatal Black Sunday, the third lap of the race was set as a ‘silent lap,’ during which TV and radio announcers were silent while fans held up 3 fingers in a gesture toward Earnhardt’s car number. It was also the year when the youngest ever racer, Trevor Bayne, won the Daytona 500 at just a day over 20 years old.

One of the most notable races in the history of Daytona, the 2012 race was won by Matt Kenseth. It was the first to be postponed from its scheduled date by one day due to extremely heavy rain, meaning that John Cena, who was supposed to wave the green flag, was unable to attend due to WWE duties.

We’d consider this one a turning point in NASCAR racing, as it was the debut of stage racing, which meant that the race was split into three segments, allowing added strategies as well as varying playoff points. Kyle Busch was the very first to win the title, as he was able to take the first 60 laps.

Most Memorable Racing Moments from Daytona