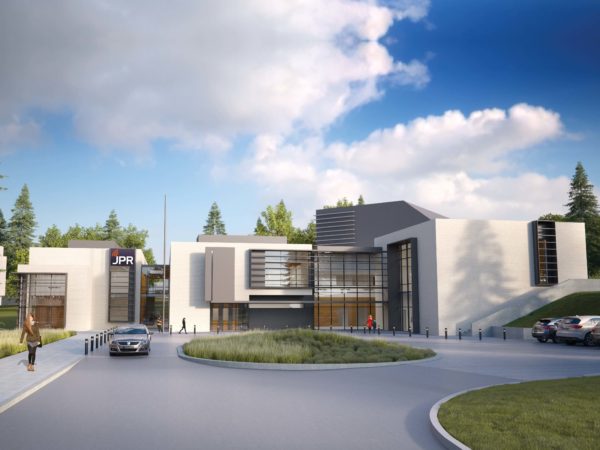 Remodeling or rebuilding isn’t only for updating the old; it’s also to expand on something already established. Southern Oregon University’s construction of a new theatre building will not only update and expand space, but it will also allow more students to enroll in the program.

Director of the Oregon Center for the Arts at SOU David Humphrey says the new building has been in the process for almost 15 years. In 2013 the construction of the building was funded in the Oregon State Legislature session and construction officially started last year. Ausland Construction from Grants Pass is the general contractor for the site and TVA Architects from Portland are the architects.

“The Theatre Program has only accepted a fraction of the number of students who apply and this has been primarily due to the size of the facilities,” Humphrey says. “The goal for the Theatre Building renovation and expansion was to add more studio spaces for training as well as to update and expand the existing spaces.”

With the new building, as well as expanding preexisting areas, there is a lot in store for the SOU’s Theatre Department. “The new theatre complex will allow students to have more studio spaces to learn technique and in a much safer environment,” Humphrey says. “Also it will allow for more showcase performance opportunities for students. In addition, students will have access to state-of-the-art lighting, sound and projection equipment, as well as digital design software and hardware.”

He adds the construction will go beyond adding a new structure, but will also expand on what the program already has. He says, “In the original building site, we added a metal shop to the updated scene shop, expanded the costume shop, added a scenic design studio, added a new acting studio, added more faculty offices, administration space and storage spaces, replaced the HVAC system, fix the plumbing, renovated the Green Room/Student Lounge, lobby and public Men’s Restroom, new Box Office, and improved lighting throughout the building.”

The new structure will have just as many additions, if not more. “We added an entire new West Wing to the building that included an amazing performance/acting studio, movement studio, lighting lab and public women’s restrooms,” he says. “The new North Wing of the building was the new JPR Broadcast Center, as well as additional theatre faculty offices and joining the North Wing and the main theatre building is a grand hallway that includes student lounges, waiting rooms, and more storage.”

For JPR, Director of Marketing and Development Paul Westhelle says the new building will “build organizational capacity for the future growth of JPR by creating professional studios and production spaces that support higher quality programming for the community. It will [also] create a more visible home for JPR that energizes and engages both the campus and the community with cultural and civic events…create new learning opportunities for SOU students by utilizing shared facilities such as a music recording studio designed for JPR…strengthen JPR as a vital informational resource for the community during natural disasters and public emergencies by integrating a backup electrical system that can be utilized during commercial power outages…and much more.”

Another goal of the updates and new construction is creating a more professional theatre program and setting for the students and the community. “This project took a long time in planning and funding and with some delays in construction it will be a showcase on the university campus,” says Humphrey.

The “soft” completion date is March 15, but actual plans to move into the new building will be during spring break so that classes can begin here in the Spring term. He says, “We are partially in the Theatre Building now with access to the two performance theaters (we started our Winter Productions in these spaces on Feb. 15th), in the Costume Shop and Scene Shop, Green Room/Student Lounge and the Commons.”

By being able to use what they already have and stretch out into the new building, the department expects to see more students participate in the program. Sharing the building with JPR now allows both departments to more comfortably share the space. With more room to work on productions, one can safely assume the quality of shows will only skyrocket.