More than the Sum of its Parts: American Arson and its Marvelous Spaceship-Sized Pedalboard 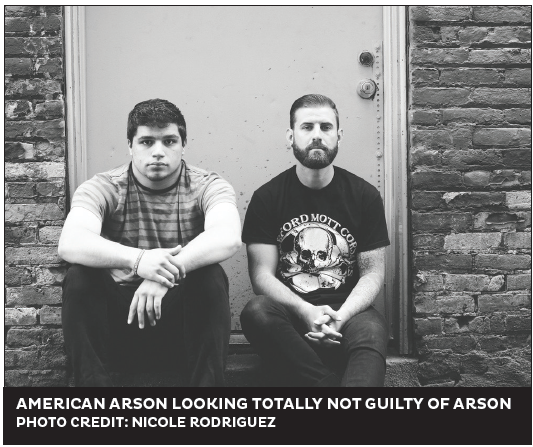 “Everything the audience hears at an American Arson show is being created live on the stage––no computers or backing tracks or anything like that,” says Evan Baker, vocalist and guitarist for Detroit band American Arson. “We take a lot of pride in that.”

Since most bands do the same, it might not seem like a thing to take huge pride in. But the reason why is because American Arson manages to sound like far more than the sum of its parts. Thunderous drums, walls of overdriven guitars, humming vocal harmonies, and more, combining for complex and layered melodic hardcore, ring forth from a stage holding only two members: Baker, and drummer Jesse Gentry.

“Evan has this sweet pedalboard the size of a spaceship he uses to make it sound like there’s three of him,” says Gentry.

“We use a technique called live looping extensively,” Baker explains further. “I also play my guitar through both a guitar amp and a bass amp, which gives it that big, chunky sound.…It’s the same technique we used in the studio, so the live reproduction sounds very similar to the recording.”

And those recordings sound massive with huge riffs and even bigger vocals.

In December, the band released The Blood & the Bones, a new installment in its three-EP arc.

“We’ve [collectively] referred to them [the EPs] as an ‘Origin Story’ to reference the sort of emotional and mental journey the band took over the course of its initial inception, and the months that followed as we discovered ourselves as a band,” says Gentry.

Baker says the EPs are a creative foundation, and the duo are excited to see how the band itself grows since releasing them, and performing them live on tour, especially in markets like Medford, which they haven’t played before.

“[W]e don’t know what to expect from the vast majority of shows on this tour,” Baker says, “and that can make you feel like anything is possible.”

More than the Sum of its Parts: American Arson and its Marvelous Spaceship-Sized Pedalboard