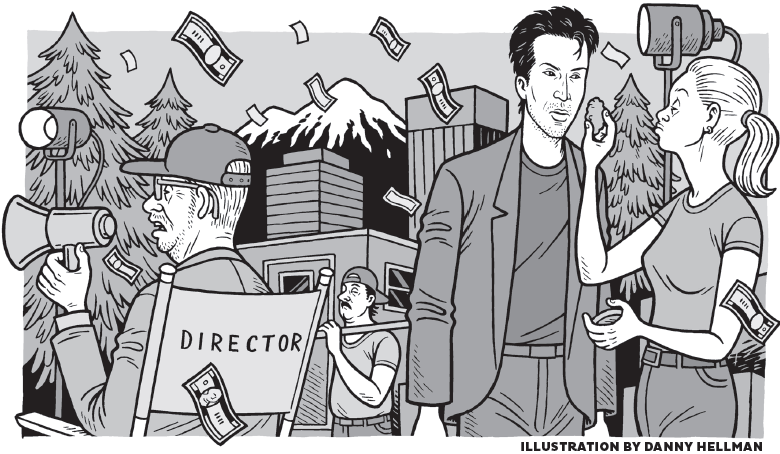 In early February, a handful of filmmakers traveled from southern Oregon to Salem. It was a hectic day, film producers and advocates for a more robust film industry in Oregon scurried around the capital building, hoping to grab a few minutes from state senators and representatives, to bend their ears and explain why the state should sustain and even increase the so-called Oregon Production Investment Fund.

No one really opposes the idea, pointed out many of those attending the “Industry Day” in Salem, yet when trying to convince lawmakers to budget funds to support filmmaking is far from a sure-thing when competing against requests for more funding for education and public safety.

The Oregon Production Investment Fund (OPIF) is both sexy, in terms of potentially luring TV and film stars to the state, and also practical, as a feasible means to invest public dollars to increase private industry in the state. The recent filming of Wild in southern Oregon, for example, dropped an estimated $200,000 into the local economy in hotel bills and contract jobs, even though they only spent a few weeks of pre-production time and one day of actual shooting in the area. Even more impressive, Brothers in Law, starring Bill Pullman was shot in Klamath Falls for a month and, according to Gary Kout, Founder and former Executive Director for Southern Oregon Film and Media, “left behind $700k in that community.”

Based on these successes, film industry advocates are hoping lawmakers will agree this session to expand available funds in OPIF from $10 to $14 million each year.

“At this time, the bill the bill has broad bi-partisan support,” explained Kout, listing off Senators Arnie Roblan from Coos Bay and Alan Bates from Medford, as well as Representatives Wayne Krieger of Gold Beach and Peter Buckley from Ashland as co-sponsors of the bill. But, he added, “there is still much hard work to be done figuring out how best to spend the state’s money before the final vote.”

Over the past decade, Oregon has provided incentives and rebates for TV and film productions that work in the state—and the results from the program have been immediate and measurable, certainly an increase in the number of TV shows, films and commercials being produced in the state, but more convincingly for lawmakers, ratcheting up an industry from roughly $10 million spent by film, TV and commercial producers in Oregon each year to $170 million annually, and a six-fold increase in industry jobs from 500 to 3000. Beyond these direct and immediate cash flows to jobs and hotel bills, there also are spillover long-term benefits, like the tourism films can generate for a region. In Astoria, for example, it has been estimated that as many as 30 people each month still visit the seaside town because Goonies was filmed there three decades ago.

Now, with a successful decade under their belts, film producers and advocates hope to increase that incentive program—and pump up the film industry even bigger in Oregon.

In its most basic terms, OPIF offers a 20 percent cash rebate on money paid to Oregon vendors and 10 percent of wages paid for work done in Oregon, with some additional incentives to hire Oregon-based workers. It is sort of a massive Groupon enticement to produce film and video projects in the state—and, in the process, pump more money into Oregon’s economy.

The currently pending Senate Bill 1578 would increase the allowable funds for the OPIF from $10 to $14 million—and, particularly interesting to filmmakers in southern Oregon, increase the incentives for filming in areas outside of Portland.

Oregon is not entirely unique—nor necessarily a leader—in offering incentives and rebates for film production; another 30 or so states offer some sort of enticement and two-third of those offering larger and more aggressive incentives than Oregon, like Louisiana, which has invested more than $100 million to draw in TV and film productions, and has seen the industry grow to a level which support nearly 20,000 jobs.

These programs grew from a concern a decade ago that a large segment of film productions and TV shows were rejecting Hollywood and sites in the States for cheaper venues in Canada or abroad. Starting in 1997, Canada began offering generous rebates when production companies spent money there—and the detrimental effects were nearly immediate on the film industry in the U.S.

Consider the 2003 Academy Awards: out of the five nominations for Best Film, only a few scenes were actually filmed in America. Except for two days of filming to capture landmarks like the “L” train and the Chicago Theater, the musical Chicago was ironically filmed in Toronto. Likewise, Gangs of New York was filmed in Italy, saving the producers nearly half their budget.

In Oregon, by 2003, the film industry in Oregon also was waning quickly from what had been $32 million spent by out-of-state film production crews in 1997 to $16 million, and the number of full-time jobs dropping from 500 to 250. Only two widely-released feature films were produced in Oregon that year—the forgettable Thumbsucker starring Keanu Reeves and the critically-acclaimed but little watched Mean Creek; and even both of those nearly skipped over Oregon for cheaper shooting sites in Canada.

Looking to keep costs low, the crew from Thumbsucker was ready to film in Vancouver, British Columbia. But at the last minute, then-Governor Ted Kulongoski stepped in and quietly promised to rebate a portion of their production costs—in a sense, copying Canada’s program. He dipped into a special fund, financed by lottery sales, and offered as much as $100,000 if they agreed to film around the Portland-area.

The following legislative session, that film incentive and rebate program was formalized by SB 2747—and that incentive program has helped bulk back up the film and TV industry in Oregon, with popular TV shows “Grimm” and “Portlandia” filmed in Portland, and recent films like Night Moves starring Jesse Eisenberg, and Academy-nominated Wild, appropriately so, as writer Cheryl Strayed lives in Oregon and a bulk of the narrative occurs here, much of Wild was filmed in southern Oregon.

In an interview with the Messenger, David Cress, producer for “Portlandia,” pointed out that this growth has been incremental and steady—and, as well, it has been across a board base of TV, film and commercials, which like any diverse portfolio creates a more stable foundation. “Trying to build a major industry overnight is hard,” he said. “In Oregon’s case we have developed slowly and tried to find a good situation that augments the natural indigenous growth instead of overwhelming it.”

“Its safe to say that Oregon’s program is modest,” he admitted, “the bottom third of what most states offer.” But Cress goes on to point out that Oregon offers many non-financial incentives for production companies. “We are fortunate,” he says, “in that we have some other things that help make our modest offer more enticing. Great locations, no sales tax, and a growing crew base and infrastructure. We do need to offer incentives however. States that offer nothing or less than Oregon see little activity.”