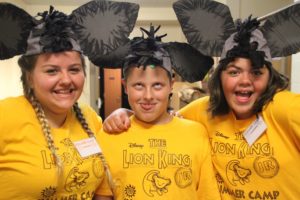 Moana, Maui the demi-god, Gramma Tala, Pua the piglet and Hei Hei (“Drumstick” the chicken) will come to life under the tutelage and direction of camp director, Bruce Allen.

“Theatre is an amazing tool for teaching kids to not be afraid of who they are, and to just express themselves,” says Allen, who’s coordinated several productions for Brighton Academy in Grants Pass. “My whole thing as director has been to teach kids humility—it’s a really important thing going into your adult life.”

Camp facilitator, Tianna Eddy has been with One Eleven since 2012, keeping her family active in theatre as well as helping other families who are interested.

“Our goal is to introduce every camper to all facets of musical theatre,” explains Eddy, who is also vice president of the theatre board. “Because nothing was happening in 2020, when Grants Pass Performing Arts Center recently gave us some open dates to use their venue it became a last-minute push to put it together because we know the community and the kids love it.”

“This camp will actually be a little bit easier than the junior musicals I’ve directed,” says Allen who’s been helping with camps for a few years, from being a counselor to a board member. “It’ll be a bit more low-key, being only two weeks of teaching and rehearsing—everyone has a good time.”

The camp filled up fast, not only because of its popularity but, Allen believes, because kids and their parents are more than ready to ‘come out and start doing stuff again in the real world’. Divided into groups, young campers from ages 7 to 17 will learn what musical theatre is all about, from improvisation and set design to acting and makeup, as well as singing and dancing taught by a professional choreographer and music director.

“They’re always fun, big productions and for the first day of camp we had the kids do kind of a group audition, singing and dancing parts of the play, and we could sort of figure out their strengths,” Eddy says. “The goal is to have all of the kids experience all aspects of musical theatre.”

Group leaders include teen and college-age actors who’ve performed on stage, including at One Eleven and will help mentor the kids, and professionals from the community to help teach workshops such as how to audition or make a prop piece. Volunteer parents are on hand to help wherever needed.

“One of the big characters in Moana is the ocean and the kids will learn about fabric props and how to move like the ocean, or if they’re one of the villagers, how they’re going to walk and move differently from the animals or the ocean characters,” explains Eddy.

They’ll learn the behind-the-scenes work, like making props and costumes, helping build the sets and doing hair and make-up, plus be given the opportunity to be on stage, whether a big or small part, so every camper will be coached in acting.

“All the kids are going to learn the same things from the director and the professionals, yet since some kids might be more gifted in the spotlight and would enjoy learning a bunch of lines, they’ll be coached a bit more in acting,” Eddy explains. “But all of the kids will be on stage for the end performance.”

“Acting out and being creative and being a big personality by taking on other characters encourages self-esteem, and that resonates for the parents and it’s why they send them to this camp,” says Allen. “It really builds a lot of self-confidence by the time they become teenagers and adults.”

A performance for friends and family will wrap up camp on Saturday, July 17.