Home»Sound»Music News»Metal of Nowhere: With Our Arms to the Sun Sounds, Lives and Plays Off the Beaten Path
Music News/Sound

Metal of Nowhere: With Our Arms to the Sun Sounds, Lives and Plays Off the Beaten Path 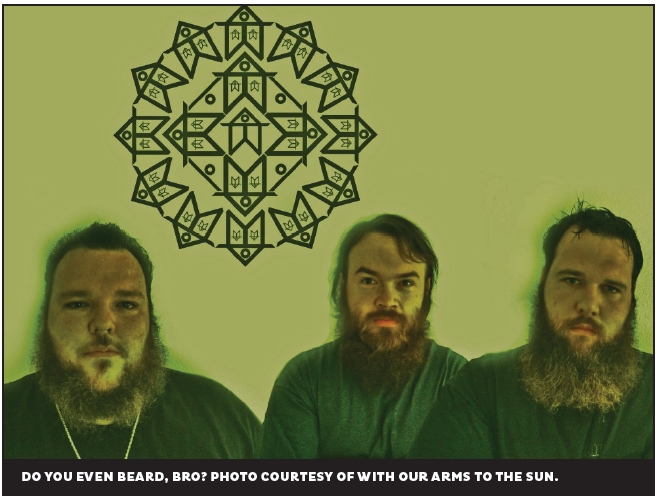 Most up-and-coming bands don’t survive their frontman moving out-of-state. But for art-metal sound wizards With Our Arms to the Sun, who will play Johnny B’s in Medford on Tues., January 12, it arguably made them stronger when founder and frontman Josh Breckinridge moved from the band’s home in “middle of nowhere, Arizona,” to middle of nowhere California, so he could be closer to the ocean.

That diversity of sonic landscape broadened the band’s already expansive sound. The term most commonly applied to describe the band’s sound is “cinematic rock,” though Breckinridge says that though he could see their music working well in a film or video game, it’s a term that band only uses because the media does. Labels aside, the band plays sprawling and complex, mostly instrumental rock that incorporates elements of psychedelic electronica and metal riffage for thickly layered sonic atmospheres that rise and fall like weather patterns or a dramatic narrative. Fans of post-rock masters like Explosions in the Sky will find much to like, as will fans of the sprawling riffage of Tool (who With Our Arms to the Sun opened for on Halloween).

Breckinridge for his part isn’t that concerned about nailing down a concise adjective.

“I just make what I want to make and people are going to buy it or they’re not,” he says.

But part of that is that exactly how sprawling the band’s sound can be, moving seamlessly from rolling synth patterns to walls of overdrive beneath choir-esque vocals.

“We’re getting older, so the older you get the more eclectic you get, more into random stuff. When you’re younger, you want to be like some famous band, but as you get older, I think you start drawing your influence less from music and more from life.”

Music that complex is hard enough to write when in the same room, but Breckinridge, a sound engineer by trade, says the band has always used recording as a tool of songcraft, sending tracks and demos to one another even when in the same town, so the distance didn’t undermine their compositional cohesiveness even a little bit.

“Basically, we now put together an album every year and a half, and we get together to rehearse before we tour,” he says. “It helps that one of the other band members is my brother, and the other is my best friend. And I’m 34. So we can communicate very effectively, read one another.”

With Our Arms to the Sun has played Oregon before (mostly Eugene and Portland), but this will be its first time in Medford, a gig Breckinridge is looking forward to.

“A lot of the small cities that are in between large markets have really rampant music lovers,” he says. “We’re from small desert towns in Arizona, so we were those kids. If a band would take the time to play our town, then we’d all go.”

Metal of Nowhere: With Our Arms to the Sun Sounds, Lives and Plays Off the Beaten Path