Home»Sound»Melting Pot: Gangstagrass Blends Sounds From Across the Aisle
Sound

Melting Pot: Gangstagrass Blends Sounds From Across the Aisle 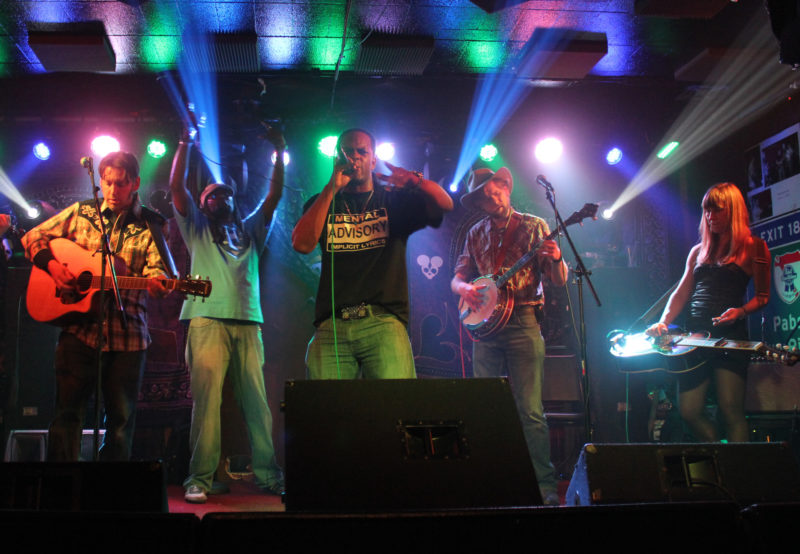 In a June interview with The Guardian, country star Steve Earle offered the hottest of hot takes on contemporary Nashville’s recent roster of twangy, chanty, odes to partying.

“They’re just doing hip hop for people who are afraid of black people,” Earle said. “I like the new Kendrick Lamar album so I’ll just listen to that.”

Earle might want to also try giving a listen to Gangstagrass, a Brooklyn-based band coming to The Sound Lounge in Grants Pass on Thu., September 7. Unlike contemporary Nashville, the band legitimately combines country and hip hop, with two serious M.C.s fronting a legit acoustic bluegrass band.

Guitarist/producer Rench, and M.C. R-Son took the time to answer a few questions for The Messenger to preview the show.

RVM: People frequently say they like everything but rap and country. Curiously, you’re doing both. Why? Was it a natural evolution, or a deliberate choice to combine those styles? How did it come to be?

Rench: I started doing it just out of wanting to hear it. My influences are mainly hip-hop and country, I grew up listening to both. I had cassettes of Run-DMC and the Beastie Boys and my dad’s Willie Nelson and George Jones records.

RVM: Are there unique challenges that come with combining genres the way you do?

R-SON: For me as an MC, the most unique challenge is making my lyrics accessible to people that don’t know my personal existence. Not all rap lyrics are the same as what people are exposed to in popular culture. Dolio and I are different from a of average rappers so we go to levels that many of them don’t. You’ve got to be paying attention when you’re listening to us.

Rench: They do now!

RVM: Considering the current state of American social relations, what does it mean to have a multi-racial band combining two cultures that are generally seen as being at odds with one another?

R-SON: It feels to me some days like we’re the only thing capable of saving this place. Good music is good music. If you can’t agree on that we’re all doomed. What we do is make good music and regardless of your race, creed, color or musical tastes, we’re making good music for you.

RVM: So who is your audience? Do they get along?

Rench: Our audience is not hardcore fans of a specific genre, they are people with eclectic tastes—they have already been mixing it up in their collection and what they listen to, so most of them get us right away. Basically our audiences are awesome.

R-SON: I think we fit in as well as, if not better than a lot of music. What you’re getting from us is more real. There’s no wack MCs on this. There’s no pseudo-bluegrass players on this. Everything you’re getting, from the core group to anyone invited to get down with us, is 100 percent authentic. And in world where too much of the music seems fraudulent, not fitting that mold is okay.

Melting Pot: Gangstagrass Blends Sounds From Across the Aisle