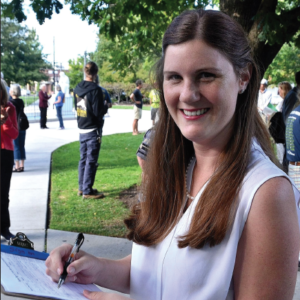 Rogue Valley Messenger: What is your “calling card” issue for this campaign?

Michelle Blum Atkinson: Public safety is the most important aspect of government. I think it would be great if Medford were known as the “safest city in America.” By setting robust goals, we have something to work towards. We never would have gone to the moon without setting that goal. We must work together in order to protect our most vulnerable people, especially kids, from hunger and homelessness.

RVM: You have been very involved with civic issues in the past. Why not continue with that involvement? Why run for elected office? It seems like putting yourself in the line of public firing squad?

MBA: I will continue my involvement in civic involvement and running for city council is an extension of my public service. It is an opportunity to speak with people about the city of Medford and what we can achieve by working together.

RVM: It is an interesting race in that there are four out of five candidates who are women.  Is that affecting the tone or topics of the campaign?

MBA: I am very encouraged by the fact that women in Ward 4 feel confident enough to run for an office. It should be noted, however, that a majority of the Medford City offices have no women running in this election. In Medford there will be five seats filled this election, including mayor, and women are on the ballot for only two of them.

So, it really comes down to numbers. A recent report by the Women’s Foundation of Oregon revealed that women in Jackson County make up less than 30 percent of the public offices.

RVM: Do you feel as if women bring a different sensibility to politics?

MBA: Is this a trick question? Men and women can be equality sensible.

RVM: How has gender played a role in your campaign and/or political career?

MBA: I have repeatedly been asked questions that I doubt men get asked. For instance, men are not typically questioned about how gender plays a role in his decision-making. Many women feel discouraged from being involved in the process because they are singled out by their gender: This is true whether it’s politics or science or trade jobs that women are not traditionally encouraged to participate in. I simply want women to feel that they are welcome to join the discussion and help make our community a better place.

MBA: The biggest challenge for the City Council will be setting priorities and then working within the budget to achieve our goals. I have been studying the city’s budget because I want to help our economy thrive so we have the resources needed to make sure our streets, parks and neighborhoods are safe.

MBA: Agent Dana Scully from “The X-Files” is one of my favorite TV characters. She is brave, strong and hard-working. She stands up for what is right and dedicated herself to protecting people.

MBA: RoxyAnn Claret is my favorite local wine, although there are some other very good ones, South Stage Cellars and Valley View make some delicious wines.