Riding high on a 10 game winning streak as of Thursday, July 21, the Medford Rogues baseball team is showing no signs of stopping as they approach the end of their season. With seven home games and eight away remaining in the season, the Rogues have nearly a game per day from July 28 through August 11. Check out their full schedule at medfordrogues.com. We caught up with outfielder/infielder Derron Davis to get a perspective from the field on the key to their success. 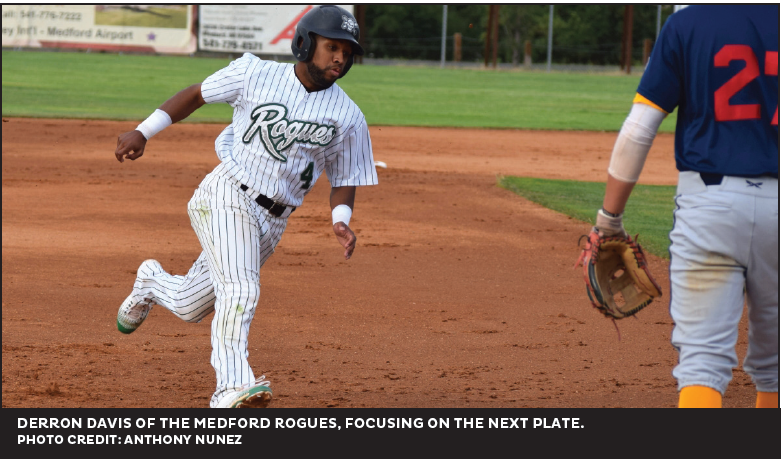 RVM: How long have you been playing baseball and what impact has it had on your life?

DD: I’ve been playing baseball for 20 years. Started around two. It has taught me so many lessons like discipline and determination and drive. It has kept me level headed with everything that has gone on growing up. It gave me an outlet to let me be free and let everything go.

RVM: How long have you been playing for the Rogues?

DD: This is my second year with Medford. I like it a lot more than playing with a normal college team, simply because the coaches make it so much more fun to play because they let us be our own players and also I get to play with a bunch of guys who are hungry and determined and they want to win as bad as anyone else. The other teams have been fun, but this is the most fun I’ve had playing baseball in a long time.

RVM: The Rogues are having a great season, and an awesome winning streak, what do you attribute the team’s success to?

DD: Really just toughness. We just don’t lose; some of those wins came from the last few innings. We step on the field and we know we are not going to lose.

RVM: What is the biggest challenge that the Rogues will be coming up against heading into August and the end of the season?

DD: The biggest challenge will be a new group of guys having to mesh together, we will be having some guys leaving shortly and getting more guys coming in. Just getting that to re-mesh after the bond that we have made with this core team.

RVM: Who is your favorite MLB player and why?

DD: I would have to say David Ortiz of the Boston Red Sox. I watched him growing up; I remember that I would emulate him and everything that he did. He just loves having fun out there, and he is a phenomenal player. He just enjoys it. A lot of guys forget that this is just a game. David Ortiz never forgets that.

RVM: The Sandlot or For the Love of the Game?

DD: The Sandlot. They are both classics, but Sandlot is something that we can all relate to and just playing with your friends for fun. Nothing else but pure fun, summer nights and summer days.