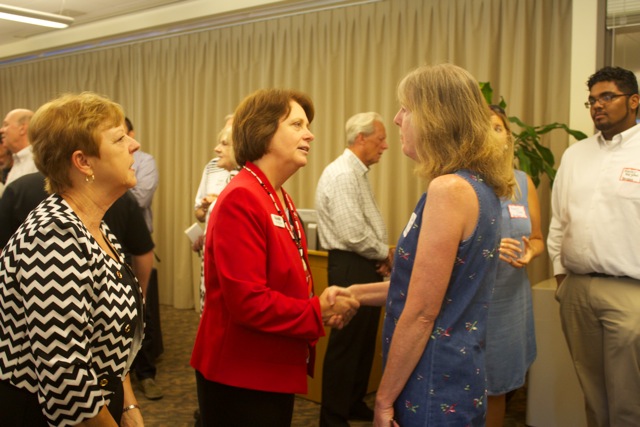 August 1 marked the beginning of a new era for Southern Oregon University as Linda Schott took office as the school’s 13th president. The former president of University of Maine at Presque Isle, Schott holds a Doctorate in history and humanities and a Master’s in history from Stanford University, as well as a bachelor’s in history and German from Baylor University. A Texas native, she is looking forward to a living in a community-oriented city with a warmer west coast climate. The Messenger recently tagged along for an afternoon with the new president.

Rogue Valley Messenger: Do you have any immediate projects or plans for the university?

Linda Schott: There are things that you can do wrong when you take over a position like this and in my mind one of those things is to think you know what a campus needs before you get to know the place. I know there’s a sense of urgency to move us along in terms of planning. But sometimes if you act too fast it slows you down in the long run.

RVM: Affordability is becoming an increasingly keen concern for students, especially with rising tuitions and student loans. Is there anything that you, as a college president, can do to keep tuitions affordable and/or mitigating student loans?

LS: We’re talking about pulling together a report for the board that will look at student debt and costs nationally and then situate SOU in that larger national context. I know that we’ve had tuition increases so it’s about what we do in terms of our scholarships and financial aid as we increase tuition.

RVM: How would you feel about making a tuition increase?

LS: Nobody wants to raise costs. But you look in the big picture of everything else that you’re doing and that’s how you make those decisions. It would not be responsible of me to say we absolutely will not have a tuition increase or we absolutely will have one. It just has to be more nuanced and subtle than that. We want to control costs, we want to keep it as affordable as we can, but there are costs that we have no control over.

RVM: In a recent economic speech, Hillary Clinton said, “We’ve got to reverse what has become a kind of commonplace view, which is everybody needs to go to college. Well, in fact, more than half of the jobs that are going to be available in 2020 do not require a college four-year degree.”  What is your reaction to that statement?

LS: Not everybody needs a college degree. We know that there is an advantage to having a college to degree. On the whole folks who get baccalaureate degrees end up earning about a million dollars more over the course of their lifetime than people who only have a high school diploma. But not everybody wants this kind of work. The way I think about education is that we need an education sector that offers a lot of different options and alternatives for different kinds of learners with different life goals. One size really doesn’t fit all in education.

RVM: What are some ways that SOU can compete with UO or OSU for students?

LS: We’re getting ready to start a year of a planning process where we’re really going to clarify who we are, who we are going to serve, and what we want to focus on, because SOU has been all over the map with things in the last decade or so. We’ve got a strong liberal arts core, we’ve got our professional programs, but the state is saying that they’d like for us to have a clearer focus. It’s not a matter of trying to recruit UO students because we may not be appropriate for them and they may not be the kind of students we’re going to be looking for.

RVM: SOU has some strong athletic programs. What emphasis do you place on the athletic department as raising the public profile of SOU, as well as a recruitment tool?

LS: Clearly athletics can serve as a recruiter for students to campus. It’s an important part of the college experience for some students. I think for the student athletes it can be a very powerful way to engage with campus and I think it’s an excellent retention device for the students who are involved in it. But it’s not our only recruiter. We have a diverse program that we offer so that we attract students who have different interests. Some of them are going to be interested in athletics and careers in that area. Just as our music performances, Jefferson Public Radio, Schneider Art museum; all of those are front doors into the campus. I don’t see any of them being more important than the other. As a public institution, we are here to serve a diverse group of students and by doing that we interest diverse people in the campus.

RVM: Can you tell me about one of your role models?

LS: One of my favorite figures in history is Jane Adams. I did a book on the history of the women’s peace movement and she was a primary figure in the movement; she won the Nobel Peace Prize. I have always admired her ability to compromise and lead through compromise, but also not being afraid to take a stand when she really needed to. Especially during World War I standing against war when it was not very popular to do so.