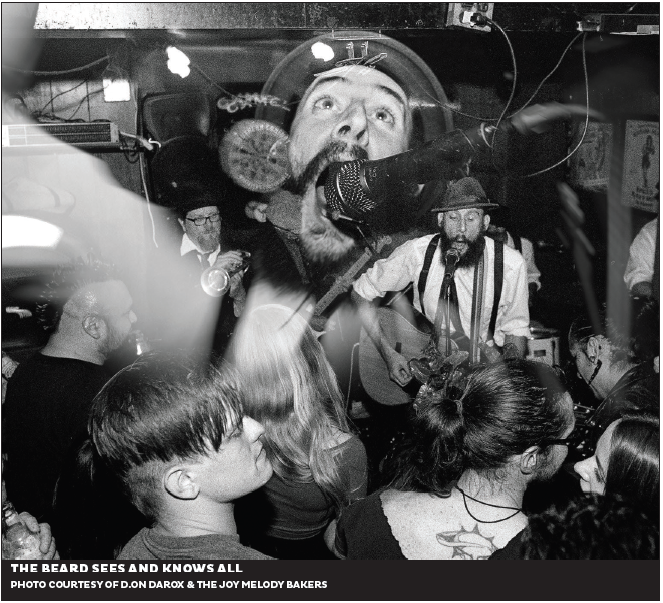 “We have this thing where we say ‘let us help you shake out the bullshit’ and that’s our main goal,” says D.on Darox frontman of D.on Darox & the Melody Joy Backers.

Come Sat. June 25. Grants Pass locals will have the opportunity to shake something loose at The Haul tap walk.

Audiences will likely be shocked by the booming growl emitted from Darox’s slender frame. Though many artists have now taken to the pack-a-day style of vocal in an attempt to capture some of the magic possessed by Tom Waits, seldom is it done to such great effect. His powerful baritone in combination with an eastern European take on jazz and blues results in something extremely danceable.

“Linage and lifestyle,” says Darox. “I definitely call myself more of an urban gypsy as far as lifestyle goes, and I know that a few of our members have gypsy backgrounds and heritage. Romani and Czech, our trumpet players grandmother use to sing and play the accordion and was a gypsy. A lot of my family came over from Europe, Czechoslovakia and Yugoslavia.”

D.on Darox & the Joy Melody Backers borrow heavily from not only the old world but from the roots of Appalachian bluegrass. Though Darox admits to having held a long-standing appreciation for punk and metal music he believes he has always been influenced by sounds before his time.

“I’m a very big fan of my grandmother’s kitchen as well. In her kitchen, there was nothing but AM radio going on all the time and I think I was heavily influenced by a lot of older music. Though it may be subconscious I think that plays a role in your writing.”

This writing serves not to romanticize everyday elements of life but seeks to tell cold truths about Darox’s observations about life, for better or for worse.

“I think there are a lot of things I’ve gone through in the past or feelings I have felt in the past. Self-loathing, stuff you tend to grow out of, you don’t necessarily feel that way anymore but somebody else might. There’s this song Betsy, completely true story though the names are changed, it’s about a lady who only likes you when she’s drunk and I think a lot of people have experienced that, or maybe they were the Betsy you know what I mean?”

Despite the Darox’s willingness to explore heavier themes the set is anything but a downer. Darox looks forward to helping the bar growers of Grants Pass, Jacksonville, and Eugene gets down on the band’s first trip to the Oregon territory.

Cutline: The beard sees and knows all