Looking Ahead: A Competitive Season for Southern Oregon Spartans 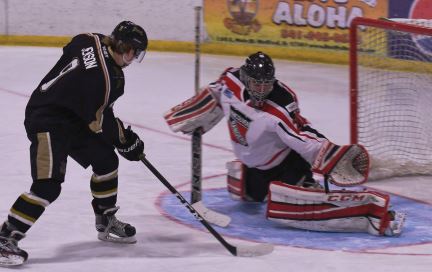 A third of the way into their season, the Southern Oregon Spartans are looking at the rest of the season optimistically. Trailing closely behind the Idaho Jr. Steelheads as second in the Northwest division, the team has plenty of time to catch up.

“Last year we ended up in third place,” says Head Coach David Cole. “We went to the second round of the playoffs. We had a successful season. When we took over we had won 12 games the previous year. We went 33 the first year and 34 the second year. We’re in one of the most competitive positions in the league.” Not only are the Spartans second in their division, but they’re in the top four teams out of 27 in the league. “Our goal is obviously trying to compete for first place.”

“I think this season is probably a more skilled team. A faster team,” Cole says in comparison to last year. “We have a kind of a unique blend of older and younger players.”

One of those young players is 19-year-old Canadian Forward Chris Seto, who has scored 31 goals and has 20 assists so far this season. Forward Cameron Seto, Chris’ older brother, has also been instrumental for the team with 12 goals and 23 assists. Of course, defense is essential also to the game. 19-year-old goalie Mark Vlahovic has already 425 saves this season, contributing to the team’s 12 wins with his consistency.

“Our division is a very strong division. Very competitive,” says Cole. Most games so far in the season have been, what Cole refers to as, “two and three game stints.” He adds, “It’s just all the games seem to be very close, which is great for a young athlete. You need those very competitive games.”

Cole also emphasizes the diversity within the team, with a number of Canadian and European players. “I think a lot of the foreign players want to play here because ice rinks are smaller. We play on an NHL ice surface.” The blend of college and pro-sized rinks are ideal, allowing for less ground to cover and a much faster game.

So far there haven’t been any big changes besides a few personnel changes, which Cole says is common. Although they prefer to stick with who they recruited in the beginning of the season, “it does happen. The big thing for us is as long as our athletes are getting better on a weekly basis.”

With a 52 game schedule and 10 five game segments this season, the Spartans have to take one game at a time, while finding ways to continuously improve. “Every five games you’re reevaluating your performance,” Cole says.

Reevaluating and preparing for each segment of games, along with great talent this year, has secured second place for the team thus far. With still most of the season ahead of them, the Spartans look to replace the Jr. Steelheads as number one.

The Spartans’ next home games are Friday, December 9 through Sunday, December 11 against the Lake Tahoe Icemen. For a full schedule, roster, and more information, visit sospartans.pointstreaksites.com/view/sospartans.

Looking Ahead: A Competitive Season for Southern Oregon Spartans