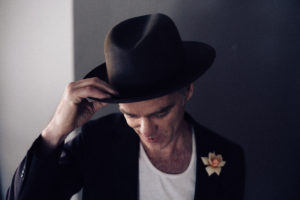 San Francisco based songwriter Sean Hayes exists in that in-between place. He’s got some serious belt-notches (dueting with Aimee Mann, touring with Ani Di Franco, and high-profile song placements in TV shows like Kyle XY, Parenthood, and Bored to Death, to name a few), and no shortage of dedicated fans, but prefers to keep things independent, sticking to folksy americana strummers rather than chart-topping hits. It’s a combo that’s made him a perennial fave in Southern Oregon, where he will return to perform at Brickroom on November 6.

He took the time to answer a few questions for The Messenger to preview the show.

Sean Hayes: Many times! Love it in Ashland. People come out ready to have a good time. Such a great place. No expectations!

RVM: Your resume has some big accolades on it (playing with Aimee Mann, touring with Ani DiFranco), but you still largely fly solo. What is it about independence that appeals to you?

SH: By solo I guess you mean no record label. Truly independent. It is who I am in a very real way. It’s not that I set out to be independent. One day though I did have the understanding that if I did not do it it was not going to get done.

RVM: What is it that draws you to the stripped down folk sound you specialize in?

SH: I love all kinds of music but I am extra attracted to music without a lot of ear candy. I like the cracks and the raw spots. Music that can be played anywhere.

RVM: So what are you going for when you write a song then?

SH: I tend to sit down and  play. Things come out or they do not. There is not much of preconceived notion. This is probably why I tend to write more emotional songs. It’s not based on genre for me just pulling back the layers.

RVM: What about when you step on stage? What’s your goal there?

SH: I try to be involved with the meaning of the song. Interact with the people I am playing with. Get use to the sound on stage. Its different every night. I also let the audience do what they are going to do. If they want to party or if they want to listen or a good combination of both. Every now and then I need to step in and give some instructions. I’d like to play a slow dance party sometime.

RVM: You’re going to be on your until Mid-November. But what’s on the radar for you after you get home?

SH: Hang out with my two little boys and their mama. Also helping with some music for a documentary that will come out on HBO next year.