Home»News»Locally-Grown: As In Food, As In Radio: 105.7 Is Cave Junction’s Very Own
News 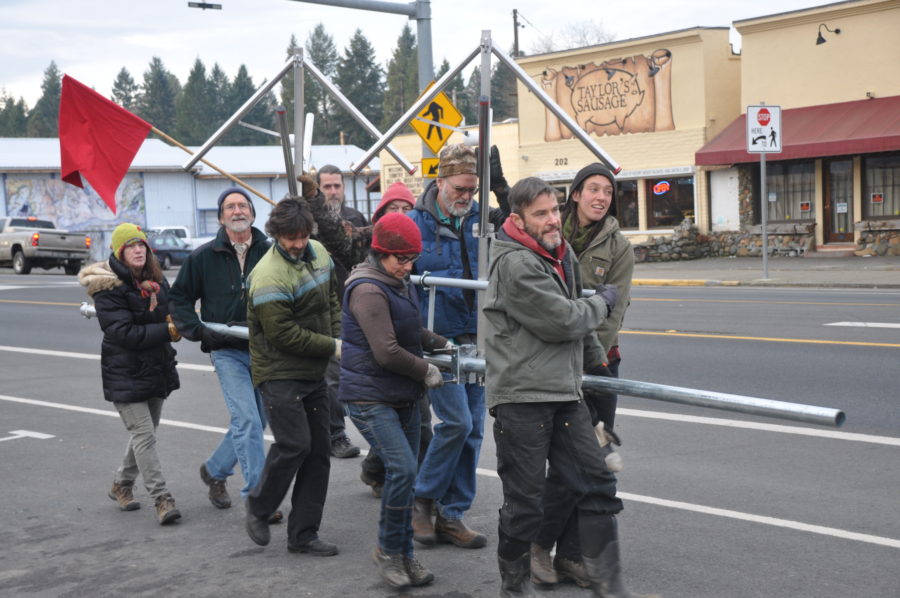 Just 20 years ago, the 10,000 radio stations in America were owned and operated by some 5000 different organizations, creating an eclectic patchwork of talk, music and what-not. But since 1996, radio increasingly has been consolidated into the hands of just a few corporations, with nearly 90 percent of radio stations in the hands of four companies.

But that trend is changing, with community radio stations—so-called Low-Powered FM, that have the ability to just broadcast for a few miles—popping up in cities and towns.

Rogue Valley Messenger: What shows are lined up?

Keeeth: To start with, we’ll be broadcasting a lot of music mixes along with some syndicated shows that are not heard in the Illinois Valley—or, in the Rogue Valley, either! Later, probably in March, we’ll start adding programming by our first group of freshly-trained local DJs, some doing music shows, and some doing interview/public affairs shows.

RVM: What is the mix of music and “talk”?

I think we’ll settle into a mostly-music station, but with plenty of interview and info shows—mostly syndicated ones like Big Picture Science, Democracy Now, Fifty-one Percent, Economic Update, off the top of my head. We’re starting right off this spring with some locally-produced public affairs-type shows, too, and we plan to train and mentor more folks who want to do that kind of programming– which is a bit more challenging and time-consuming to do, of course.

RVM: What is the process for determining a show?

It all starts with anyone who’s interested going to our website and filling out a KXCJ Program Proposal there, or connecting with us directly—Cave Junction is a small town, after all!—and getting a paper form, fill it out, and it goes to the Program Review Committee. We try to get back to the person right away, to answer any questions they have, and get the ball rolling.

RVM: Why radio?  How is radio different than other mediums, and/or how does it serve as a “community builder”?

People have been talking about the “death of community radio” for years now, and guess what, community-based radio is growing, at the same time that commercial stations are closing down, getting bought out by huge chains, and getting dumbed down and what I call “blanderized.” There are just over one thousand new LPFMs like us, getting on the air since 2013! That tells me—and anyone who’s paying attention—that there’s a deep need, and a growing movement, out there across the country, and right here, in the Illinois Valley.

RVM: Where is the tower located? Are there any stories to tell about finding the right location?

Both our studio and our transmitter site are located in Cave Junction. CaveNet, a local ISP, provided space for our antenna on their tower, so we didn’t have to build our own, and another local outfit, Sis-Q Communications, actually hung the antenna there—together, they totally saved the day for community-powered radio in the IV!

RVM: How much money have you been able to raise? And what major purchases?

Over the past three years, we’ve raised over $40,000, almost all of it through direct, face-to-face donations from community members at a bunch of fundraising events we’ve organized. I’m proud of the great people in this valley who did that– it’s an amazing thing.

RVM: Some time ago, you received a donation of 2000 records! What are some of those records? Why not streaming music?

We’re broadcasting, testing and fine-tuning our equipment at the moment, and we’ll gradually roll out our full schedule over the coming months, in a sustainable way—we’re all volunteers, and we’re all learning by doing. Almost every LP and CD in the station has been donated by our supporters and local musicians, too, and we definitely want to highlight all the local talent in the IV. We plan to have a weekly, live-music show, for example.

We hope to be streaming our broadcast later this year, but that’ll take a little bit more equipment, money and time. Actually getting on the air was the crucial goal we had in front of us, both for all our supporters, and for the FCC.

RVM: How do you think KXCJ will change the community?

There are a lot of different communities and—really, cultures—within the Illinois Valley, and we don’t necessarily know of each other, or talk with each other. I think that’s harmful—especially given the behavior and direction of national political groups and people right now. I’m not saying we all have to like each other in the IV, but we do need to treat each other with some basic mutual respect, and listen to each other– and then ask our questions. We have an opportunity to set a local example for how we’re going to work together on the very real problems we face.