Life In The Fast-Lane: The Rise of Slow Corpse 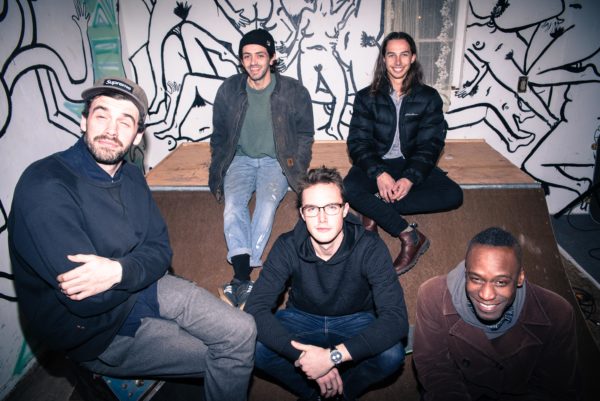 Slow Corpse were formed less than three years ago and have already managed to get themselves signed to the Portland-based Tender Loving Empire label. The fact that they had created a dedicated following was the main reason they got signed, but it was only after badgering the label for months that it finally happened. And now, they are repaying fans with their debut album for Tender Loving Empire, Fables with a release show at Brickroom in Ashland on Friday, May 4.

It is the latest stop on a relatively brief, but full journey. Vocalist/guitarist Mitchell Winters and guitarist Brenton Clarke had known each other for years, but it was through a chance encounter that they formed a band together. “I was in the garage one day and [Brenton] was playing guitar and I started singing over it,” says Winters. “And I was trying to be all pretty over it and we started making a song. That was two and a half years ago.”

“I started smoking pot in high school and I started playing guitar,” says Clarke. “Many days of smoking weed and trying to be Jimmy Page.”

It’s been less than three years since Slow Corpse formed, and already they have built a strong following. The Brickroom is their home base, and the venue has played a fundamental role in their success.

“This will be our tenth show [at the Brickroom],” says Winters. “I don’t know if that seems right; so many times I’ve lost count. It’s our favorite spot. It’s always a good turnout, and the owner and staff are really cool. They treat us really good.”

Besides signing to a label and playing shows at home, the members of Slow Corpse are eager to hit the road and gather some new fans.

“We have a two week tour stating June 15 and that’s just a west coast tour,” says Winters. “Up and down the coast. We’re also playing Apple Jam.”

“It will definitely be at least ten shows,” says Clarke.

“We are also playing the Upstream Music Festival in Seattle,” adds Winters.

Besides local festivals, Slow Corpse are ready for the big time. And even when they are joking, they are serious.

“Unironically we would play the gathering of the Juggalos for free,” says Clarke. “I think I can speak for all of us when I say that.

Slow Corpse managed to get signed to a label out of sheer tenacity. Their hard work and dedication have paid off and the future is looking bright.

“We have a bunch of songs that didn’t make the album that we really like, so we might release some of those,” says Clarke. “We’ll probably try to sell as many records as possible, and play as many festivals as possible. Get the music out there.”

“I want to see more moms and dads at our shows,” says Winters.

Life In The Fast-Lane: The Rise of Slow Corpse