Home»Culture»Lace and Leather: Hamlet Puts Neurosis in the Spotlight
Culture

Lace and Leather: Hamlet Puts Neurosis in the Spotlight 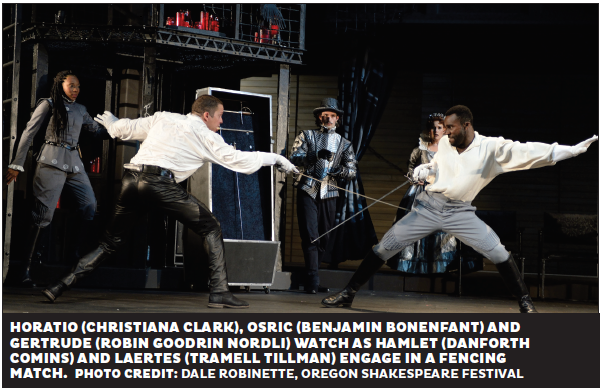 On a recent cool, smoky night in Ashland, nature’s own special effects couldn’t be more fitting for Shakespeare’s genre-defining revenge play. In this updated version of the familiar story, the deliciously dark pairing of drama and heavy metal floats like an eerie ghost above the audience.

Dressed in boots and a leather jacket and looking every bit the teenage rebel, the Prince of Denmark himself is played by Danforth Comins, whose twisted grins and teenage sulk bring both humor and an air of unpredictability to the role. In his first few lines, he sets up the backstory—Hamlet is a smart, maybe even smart-ass kid who idolizes his father but has a strong mind of his own. His father, the King, is now dead, and that’s the perfect seed for a garden of angst to crop up in any young person.

When Hamlet learns that there is foul play afoot, and that his closest living kin were in on the murder, it doesn’t take long for his neurosis to turn into mania. But when he takes up a knife and stabs a beloved character through a curtain, he makes the transition to mindless killer, and the age-old play also seems to transition into a commentary on issues all too modern and present.

Hamlet is a story about what it takes for a man to go over the edge. The question “To be or not to be,” now a common cultural trope, is Shakespeare’s way of asking what people today ask whenever there’s a senseless act of violence. What caused this person to flip? What, exactly, were they taking revenge on? And was it worth it?

For the victims and those who are left alive, the answer of course is “no.” But Shakespeare’s brilliance lies in his ability to take us inside the mind of the killer and watch him navigate what to him are very real and inflexible dictates. In Hamlet’s case, these come from the ghost of his father, played very creepily by Richard Howard. Reaching through the gloom of the theater, flickering in and out of sight, he is both real and imaginary, a tortured soul demanding vengeance. All, of course, to the wail of electric guitars and heart-stopping percussive accents.

The man responsible for the soundtrack that under-35 viewers of the play will describe as “epic” is Scott Kelly, a longtime OSF techie whose band, Neurosis, has been tickling the ears of heavy metal aficionados for longer than most of those kids have been around.

Kelly co-wrote the musical score for Hamlet and appears on stage almost the entire show, up above the action, mostly just holding the guitar and looking super cool in his full-sleeve tattoos. When he does get to slide a cold ice cube of sound down the backs of the audience members, the effect is fantastic. Hamlet’s character joins the fun by occasionally picking up a guitar down on the stage and strumming a perfect fifth. And there’s a gorgeous scene in the second act where Hamlet’s spurned lover, Ophelia, played by Jennie Greenberry, sings out her distress rock-opera style.

Overall, however, the metal aspect of the production is still backseat to the script and the actors, giving it the widest possible audience appeal. Perhaps the success of this production will lead to more daring collaborations between talented local musicians and the area’s biggest cultural attraction.

The music of Kelly may glorify darkness and express a strong curiosity about death, but it is certainly not violent. Likewise for poor Hamlet, who clearly has a sense of disdain for his mother and his uncle—“Frailty, thy name is woman!”—but would not have been driven to kill them without certain outside forces muddling his judgement. May it be a lesson for all who seek to blame the perpetrators of violent acts, or even the media and music for influencing them. The sources of violence are much deeper, and much older than Shakespeare himself.

Lace and Leather: Hamlet Puts Neurosis in the Spotlight