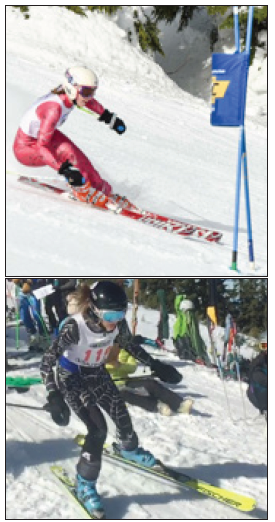 Starting on Wednesday, March 2 and ending on Friday March 4, the state championships will feature boys and girls categories in two events: the slalom and giant slalom, which, as its name suggests, features a steeper course than the traditional slalom and, with the gates spaced 25-30 meters apart versus the traditional 9-13 meters, means wider turns, more speed; athletes competing in the giant slalom often reach blurring speeds of 40 miles per hour.

OISRA is a massive organization, representing approximately 75 teams from around the state—and this race is a big deal. Each year, the championship rotates to one of the regions in the state, which have spent the previous few months competing as teams and individuals against other skiers in their own region. This year, that responsibility—and opportunity—to host falls on the shoulders of the Southern Oregon League of Alpine Racing (SOLAR), which is headed by local ski coach Gary King.

Unlike the rest of the leagues competing in the state championships, King points out, all of the teams in SOLAR train together. “We are a ski racing community,” he says, “so the kids are kind of like ‘friend-emies’. They’re friends when they train together, and then when its time to race they want to beat each other.”

The ski coach is particularly eager to see the girls from Ashland High compete after taking home second place last year at Mt. Hood, which was an impressive accomplishment considering the rather tepid circumstances. “In the last two years we have barely had a chance to train,” says King. “Two years ago we had no snow at all…I think we had three days of training [at Mt. Hood and Mt. Bachelor] before we went to the state championships. Last year, we got up there as much as we could, but of course the conditions weren’t that great and they might have gotten in a total of five days of training.”

This winter has been a different story altogether, with snow-laden clouds finally having mercy on the drought-stricken Siskiyou’s. As of this writing, the snowpack on the summit of Mt. Ashland is just over 100 inches, and these ideal conditions are part of the reason that King is so excited about the upcoming state championships.

Of course, it takes more than just one ski coach to host an event of this magnitude. “It’s gonna take probably a hundred people to put on this race,” according to King, and nearly all of those people—parents, friends, ex-racers and local skiers— are volunteers. The employees of Mt. Ashland will also play a significant role in the race, especially the groomers who will ensure that the course stays fast and consistent. One of the head groomers even told King, “Gary, you guys are gonna have the best track to race on that you’ve ever had.”

The results for the slalom and giant slalom races fall into two different categories: individual and team. Each racer is allowed two timed runs in each event and the faster of the two is scored. The skier with the fastest time is named individual state champion of that event. For the team category, each high school is represented by five racers per event and the three fastest times count towards the team’s total score.