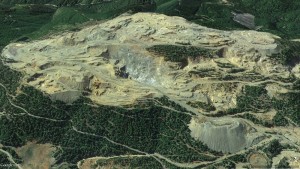 The Kalmiopsis wilderness. Hard to find. Harder to pronounce. And even harder to protect.

The rugged and resource rich patch of wilderness home to the Smith, Illinois and Rogue rivers has been a prime target for resource extraction companies for a long time, especially nickel mines, three of which are currently proposed in the area.

But legislation recently passed at the end of June by Congressional members Peter DeFazio, Jared Huffman, Jeff Merkeley and Ron Wyden has bought the fragile wilderness some breathing room from any new mining claims.

“The withdrawal of any new mining claims in this area will protect biologically unique natural spaces in my district, as well as support Oregon’s salmon population and safeguard safe drinking water sources for thousands of families in the area,” Congressman DeFazio wrote in a press release.

The legislation segregates the region from the 1872 Mining Act for two years and opening up a 90-day comment period in which citizens can tell the BLM whether they think the area should be permanently protected from mining claims.

“We have a website, which is the easiest thing for us,” says Jeanine Moy, Conservation Associate for the Klamath-Siskiyou Wildlands Center, a local environmental advocacy group. “People can also do handwritten comments and send them directly to the BLM.”

Moy says she is personally aiming for 6,000 comments between Jackson and Josephine counties before the comment period closes on Sept. 28.

Moy thinks it’s especially important because of damage done nearby by a nickel mine near Riddle, a mine which is now a superfund site.

“The mining act is from 1872,” she says. “It was originally designed to encourage people to go out and mine. When you make a claim to the land you have the mineral rights. It was extremely cheap. There’s no royalties. But now, when there are big companies, they pay nothing to the Government. When it turns out is to be a toxic hazardous site and then it’s left to the county to clean it up.”

The proposed mines are located near Rough and Ready Creek and in the Cleopatra area near Cave Junction, with a third located near the headwaters of Hunter Creek, which feeds water to Gold Beach and Crescent City on the California Coast. And Moy’s position is that the clean water is far more valuable, to the residents and to the economy, than a low-grade nickel mine.

“It’s kind of a critical time for the local economy and mining could destroy any chance of a recreation economy,” she says.

Additionally, it could undue decades of work and millions of dollars spent restoring salmon habitats.

“I think people value clean water,” says Moy. “And when there’s more awareness of these issues, we’ll be able to show the delegation that we’re in support of more legislation.”

The comment period runs through Sept. 28. Comments can be made at KalmiopsisWildRivers.org.