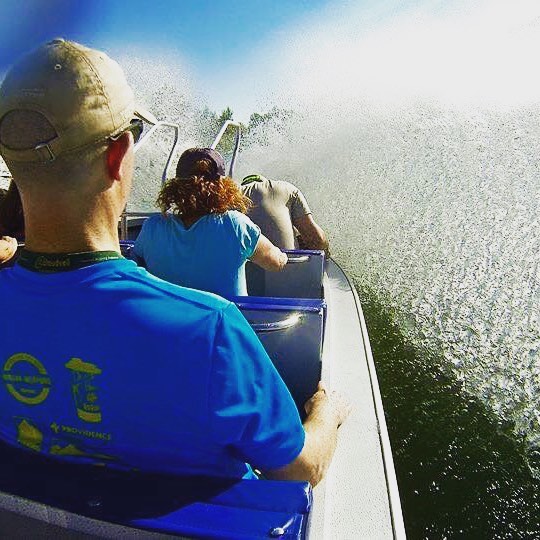 Jet boat excursions on the Rogue River are nothing new. They have been around for nearly 60 years. But, never east of the Siskiyou Mountain Range, in the half known as the Upper Rogue; that is, until now.

“Life is short,” says Taylor Grimes, guide and owner, together with his wife Emily, of Rogue Jet Boat Adventures. “You should do what you love and enjoy.”

Grimes not only provides these words as inspiration, but has lived them. Seven years ago, he sold his portion of a global software distributing company, and decided to get out of the cubicle and into the wild. An avid sportsman, he’d often jet boat to areas of wilderness to hunt and fish. The couple decided to start a jet boat excursion company and introduce people to their homeland surrounding the Table Rocks area of the Upper Rogue River, a popular yet inconspicuous cache of Oregon history.

Now in its seventh season, Rogue Jet Boat Adventures takes explorers from the point where Gold Ray Dam once stood beneath Lower Table Rock mesa, to Rattlesnake Rapids further north, viewing places of the Wild and Scenic Rogue one simply can’t see by any other means. The history of the people and the lands shaped by the river is brought to life through Taylor’s fascinating information.

He points out where uranium mining was attempted on the cliffs of the Table Rock mesa, the spot where Fort Lane military stockade once stood, that the osprey seen nesting and snatching fish migrate all the way from Brazil and many other intriguing facts.

Roots on both sides of their families run deep and are steeped in local history. Taylor’s Klamath Indian ancestry has been near impossible to trace due to the history of relocation of the tribes and the bureaucratic hurdles, which drives his need to share and preserve the accounts of the first people of the Table Rock area.

Emily’s family dates back to the mid 1800s. “My kids are eighth generation Oregonians,” she says. “Both sides of my family came to Oregon by wagon train and homesteaded the Upper Table Rock for five generations.”

The boat the Grimes designed with a local manufacturer is smaller than most river and lake excursion jet boats. Built to accommodate the characteristics of the Upper Rogue, it’s incredibly nimble, able to enter a tree-canopied channel not manageable by larger craft, and handle the numerous sharp turns Taylor must navigate. It also makes for tight 360’s and quick splash-in-the-face stops, which Taylor uses plenty of for keeping everyone cool.

A halfway point, Discovery Park allows passengers to stretch, fish the small lake and hunt for artifacts. “The reason I started the souvenir arrowhead hunt was because when you have the thrill of finding an arrowhead, it’s a reminder that you can touch and feel that there were indigenous peoples here long before us,” says Emily. They want to expand into more education and hands-on activities at the park, including cultivating plants and handling tools the indigenous used.”I’d really like it to be a place where schools can come to have hands-on learning and see replicas of how the Native peoples lived, worked and played.”

They’ve partnered with Travel Oregon Forever Fund, donating portions of each ticket sold to further environmentally responsible tourism, and officially adopted the 14 mile stretch of river they use, with the aim of encouraging community awareness through river clean-up events.

Emily tells visitors to tour the nearby shops and grab some delicacies for the ride, as snacks and a drink, alcohol included, are allowed onboard. Next door they’ll find award-winning wine and food at the Rogue Creamery Cheese Shop, Lillie Belle Farms Artisan Chocolates and Ledger David Cellars tasting room.

Tours run seven days a week with the option to add a meal afterward at The Point Restaurant located in the historic Rostel building in Central Point. Emily takes orders before the ride, from a menu created especially for guests of Rogue Jet Boat Adventures. Meals are $12 for adults and $8 for kids.