It Still Means a Thing: The Cherry Poppin’ Daddies Complicated Relationship with Swing

There’s a simple litmus test to assess one’s knowledge of Oregon’s music scene: mention Eugene legends, The Cherry Poppin’ Daddies. If the answer is about swing music, they don’t quite have a full perspective on what’s what. 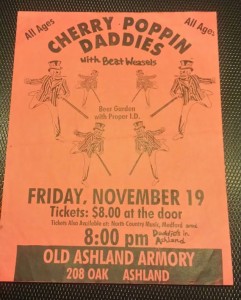 The Daddies formed in 1989 and crafted a wicked catalog of dirty funk and rock, with only a handful of swing tunes. When the band first played the Historic Ashland Armory in 1992, which it will return to on Fri., March 18, the rest of the bill was punk and metal bands, as they were on its subsequent Ashland gigs. And more than that, it wasn’t weird.

“When I was a kid, it was DIY,” says frontman Steve Perry. “The idea wasn’t to look and sing like everyone else. That’s what a tool did. So I had to figure out my own way, and that’s how I came up with the swing thing, merging that with punk rock.”

“The music history we take from is pre-Elvis, as if Elvis never happened,” says Perry. “Because when Elvis came along, it became a guitar world. Until a couple years ago. Now that The Foo Fighters are breaking up or whatever, guitars have been completely supplanted by computers. Our interest is what if none of that shit ever happened, and people still used horns. So we’re coming from an alternative universe.”

The Daddies kept up that horn-driven and punk-rooted formula for three brilliant albums, but found themselves cash poor when setting out to record their fourth. So the band’s manager suggested recording only a handful of new songs, and releasing them with a compilation of the swing tunes from its first three albums (since people asked about those the most). The band said “why not,” and released Zoot Suit Riot, an album so shoestring that its chart-topping title track was recorded in a single take.

“You hear, ‘I think I’m ready to sing it now.’ That’s me after warming up,” says Perry. “But we sold two million of those things and it’s on the sheet music now.”

The band is just now getting around to gussying up the mix and master.

Zoot Suit Riot was followed by the tragically overlooked, Soul Caddy, an album that launched with Gary Glitter style glam tune, and ended with a lonely jazz ballad, hitting every conceivable stylistic point along the way. 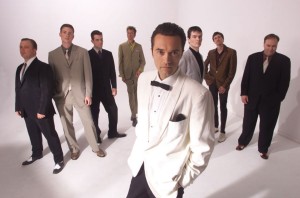 But by then something odd had happened. Punk was receding and swing had again become a thing.

“When I wrote “Zoot Suit Riot,” I wrote it as a clarion call to a scene that didn’t exist,” says Perry. Now: “All over the world, people have a swing scene. Bulgaria has a swing scene.”

But it didn’t quite go down as Perry had hoped.

“I figured the swing scene would be a hybrid of The Clash and The Cotton Club,” he says. “But then when other bands did swing music, they did a kind of ’50s version. They kept it very clean and vanilla. Most of it has to do with nice people having manners and dressing up. That’s not what we wanted. We wanted to be The Rolling Stones of swing, not The Beatles of swing. So it kind of didn’t go our way.”

But the beauty of a catalog as lengthy and diverse as The Daddies’ is that it has enough material to make any show go however they like.

“We can play the warped tour, or our hotsy totsy thing,” says Perry.

So if you go to the show in your tux and spats, don’t be too shocked if the only thing the band swings is some elbows in the pit.

The Cherry Poppin’ Daddies, with Step It Up and Go, John Dough Boys, and Flat Five Flim Flam

It Still Means a Thing: The Cherry Poppin’ Daddies Complicated Relationship with Swing