Home»News»Is the Government Trying to Pick Your Pocket? Or, Are They Trying to Save Our State?
News

Is the Government Trying to Pick Your Pocket? Or, Are They Trying to Save Our State?

Oregon has got at least 99 problems—and your vote could help solve at least one or two of them. Namely, public safety and public education.

That vote, however, requires a vote for increased taxes—and before you throw down this newspaper (or computer, if you’re reading on-line), let’s start with, we understand: Oregonians don’t like taxes. But with no sales tax and essentially a cap on property taxes (thanks to 1990’s Measure 5), that anti-tax sentiment translates to a lack of public funds for schools and sheriffs. For example, with diminishing public funds in Josephine County, the sheriff has cut back hours to 50 percent coverage, and violent crime in rural areas has correspondingly risen about 40 percent and it is the number one spot in the state for car theft.

This year’s ballot is loaded down with taxes measures—and we recommend voting YES on each and every one of them.

We understand that taxes bite, but not all taxes are created equal, and before tossing out all tax measures with your bathwater, we encourage considering how each one of these functions—and what it can do for you, and how each of these proposed taxes really won’t tax you directly at all, or probably indirectly even, unless you play Lotto a bunch and/or own a corporation that earns more than $25 million each year. 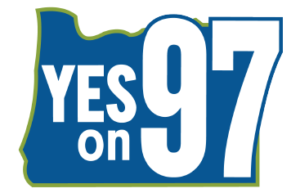 There is a charming ad that the No on Measure 97 supporters are airing. It shows a female farmer, talking about being a fourth generation family farmer—and contesting that Measure 97 will adversely affect their business.

Well, her family farm must be doing pretty well to be potentially affected by the corporate tax proposed by Measure 97. Although the farmer in the ad bemoans that Measure 97 will hurt family farms, Measure 97 is strategically and precisely tooled to affect only the wealthiest corporations; that is, only the upper most fraction of the top 1 percent of businesses in the state will see taxes change. Specifically, Measure 97 proposes a smart, strategic strike: Taxes on corporations with $25-plus million annual revenue.

The payoff? Raising $3 billion for the state! A boost that will swell revenue flow to the state by one-third. It is correct—and the opponents like to point out—that those funds are not earmarked for specific programs, however, it is likely that the measure would go straight and first to school funding and cover a nearly $1.5 billion budget shortfall.

Currently, corporation in Oregon enjoy some of the lowest state and local taxes in the nation—and, correspondingly, we have some of the most pinched public education budgets in the country as well. This is an easy correction to make.

One of the most entrenched issues in Oregon is poor high school graduation rates. For the past decade, Oregon high schools have ranked in the bottom five in the country, with on-time graduation rates barely—and sometimes not even—eeking over 70 percent.

Low graduation rates are a problem themselves, but also are an indicator of bigger, future issues: Students who do not graduate from high school earn less and often simply cannot score a job. According to the National Center for Education Statistic, under-24 year olds without a high school diploma have roughly 50 percent employment rates—or, 50 percent unemployment rates, depending if you are a half-empty or full type.

To put a finer point on it: Medford and Grants Pass are facing some of the worst graduation rates in the country. Whatever tools are available to help one or 1000 of these students find the skills and confidence should be used.

Unlike Measure 97 which is looking for general funds for public education, Measure 97 is a very specific ask: If passed, it will provide funding to send every middle-school student in Oregon to a week of Outdoor School.

Outdoor School is not a magic solution, however, there are proven results: Many who attend provide testimony that the experience helped lock in confidence and understanding about why and how to do better in school (and there are countless studies to back up that testimony, that hands-on education like Outdoor School provides directly links to better school attendance and grades).

This one doesn’t cost you a penny. It takes funds from the lottery funds. VOTE YES.

The past three years have been difficult for public safety in rural Josephine County, where the sheriff’s department has nearly halved its staff and hours, and correspondingly reported crimes has doubled, with a 40 percent increase in violent crimes, unchecked drunk driving and runaway rates for stolen or damaged vehicles. (Josephine County now leads the state in the rate of car thefts, and ranks 27th in the entire country, according to the National Insurance Crime Bureau.)

In addition, there have been widely reported stories about women who have been assaulted with no sheriff patrols to respond, and 9-1-1 calls that have gone without anyone to respond in any sort of timely fashion. A recent feature story on National Public Radio featured Josephine County’s predicament with the summarily damning headline, “In the rural west, residents choose low taxes over law enforcement,” and included a description of a brutal double murder and carjacking by a felon which the sheriff lamented wouldn’t have happened with adequate funding in place.

To hold the line with minimal services—an adequately staffed sheriff’s department, a fully staffed District Attorney office and a jail that, at least, can hold felons instead of the current catch-and-release—would require an estimated $17 million a year. That budget, however, has tapered to $14 million for the current fiscal year which began on July 1—and it is about to get worse, as even these current constricted services are about to seem like the gravy days. It is forecast that the public safety budget will drop below $10 million next year, and continue to dwindle in the upcoming years.

To reverse these trends, Measure 17-74 proposes a modest property tax levy. It is the fifth such proposal sent to voters, but Josh Balloch, who is helping spearhead the initiative, believes that this time around the results can be different.

“People are sick and tired of seeing the crime,” asserts Balloch, who is a VP of All-Care Health in Grants Pass. He believes that this time there is a “legitimate chance.” The margins of defeat for the initiative have not been massive—54 to 46 last May—and with stronger turnout at the polls expected this November because of the presidential election, Balloch believes those larger number of voters offer the initiative a good chance.

In specific terms, the initiative proposes a temporary four-year property levy, $1.42 for each $1000 assessed value—or, roughly and on average, $300 per property owner. (Property tax rates in Josephine County are the lowest in the state.) The levy would raise $11 million annually and restore most public safety services for those years.

For the love of not having your house broken into, for having drunk drivers patrolled, for giving sheriff’s an ability to respond to 9-1-1 calls, PLEASE VOTE YES FOR 17-74.

If not? Things will go from bad to worse.

The voter initiative, Ballot Measure 91, that put in place legalized recreational marijuana was worded to forbid local municipalities from imposing a tax on those sales; that sales tax was intended solely to be the state’s exclusive domain.

However, before Measure 91 could pass, some clever and fore-thinking city councilmembers in Ashland voted in a tax on marijuana sales. It was a clever end-run, and dozens of other towns and counties followed suit, recognizing if they passed a local tax measure they could argue it should be “grandfathered” into place after Measure 91 passed. Even Medford City Council, which essentially had said they would not approve legal marijuana sales even if hell froze over, was smart enough to also say that, well, if hell does freeze over, we’d consider a local tax on the ice!

In its first year, legalized recreational marijuana generated some $40 million in state taxes. And now several dozen municipalities have the opportunity to dip into this revenue stream with a 3 percent tax on each sale.

If you like pot, then heck, you feel like your weed smoking is giving something back to the community. If you don’t like pot smokers, then heck, you can consider this a sin tax, like on cigarettes. Either way, pot is selling like hot cakes and may as well put some of that money into your local government’s coffers. Vote YES!

Is the Government Trying to Pick Your Pocket? Or, Are They Trying to Save Our State?