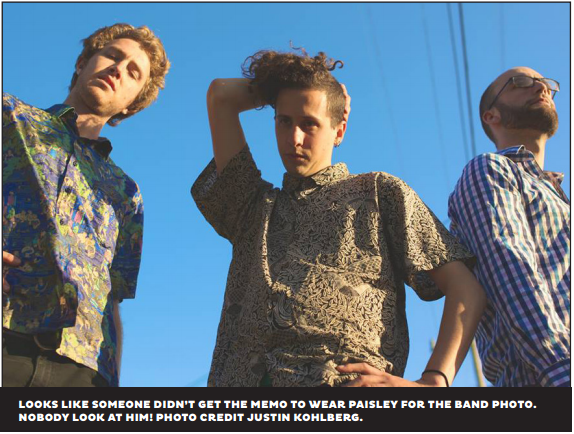 The “college band” is a time-honored cliché. Oakland-based group, Wicked Man, who will play at Johnny B’s in Medford on Saturday, Jan. 30, could have gone that route. But didn’t.

“We all went to UC Santa Cruz and studied music, but were all doing our own thing and weren’t in the same circle,” says Yonatan Tietzz, singer and guitarist for the band. “We all ended up landing in Oakland and having the same ambition.”

Though not right away. Tietzz, the group’s principle songwriter, started the group years ago and cycled through a variety of musicians until settling on those from his alma matter, whom Teitzz says brought a broadly expanded focus to Wicked Man’s 2015 EP, Terranean Tremors. The 5-song collection is a self-proclaimed “indie-soup,” containing elements of folk, rock, electronic, dream-pop and lo-fi.

“The players I’m playing with [Andrew Kunz, Justin Kohlberg,andMax Denny] all have jazz backgrounds, and I come from a folk background,” says Tiettz. “I’m used to these easy melodies that are comfortable to sing, and they like to color it with these sophisticated sounds. … I kind of like using the metaphor if I were drawing a skeleton of an image, they’re the ones who color it in.”

Tiettz says that creates a final product that is both familiar and approachable, yet new and intriguing, a combo that especially stands out on the EP’s second track and debut single, “Soil Leaking Water,” which is at its core a simple folk ballad, but dressed up with bells, a puzzle-like guitar line and fantastical, twisting flourishes of synthesizer.

“If you listen closely you will hear a lot of almost dissonant chords and concepts that intertwine different styles,” he says. “But what maintained and what still works is that there’s this cohesiveness. It’s almost electronic sounds and jazz and conflicting influences.”

Teitzz says a lot of his writing style comes from his level of agitation and dissatisfaction.

“The more upset I am, the easier it is to write music,” he says. “I don’t really understand how or why it happens. But it’s definitely something I don’t plan. I’m not in control it feels like. I’m just a body.”

This will be Wicked Man’s first time through Southern Oregon with its current lineup, and Tietzz’s first in several years, but he says the coming year should see the band making more trips our way.

“We’re working on this cohesive sound and trying to be real professional about it,” he says. “We’re down to hustle and go on tour.”