Home»Culture»In Spite Of, and Because Of: Writer Josh Gross’s Releases His Memoir The Funeral Papers
Culture

In Spite Of, and Because Of: Writer Josh Gross’s Releases His Memoir The Funeral Papers 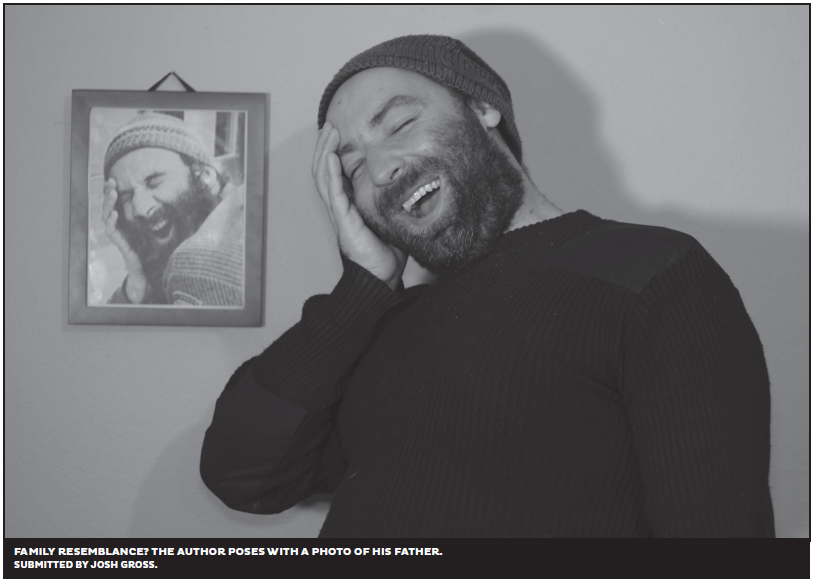 The poet Philip Larkin once succinctly wrote, “they fuck you up, your mum and dad.” Although local writer Josh Gross did not select that bitter and smirking line of poetry for his book dedication, his memoir The Funeral papers captures and picks up the sentiment. The Music Editor for this newspaper, and a veteran of the trenches of alt-weeklies, Gross is an observant, opinionated and clear-eyed critic. In The Funeral Papers, he turns that magnifying glass to his own life—or, more precisely, to his strained relationship with his recently departed dad.

Although Gross had spent much of his teenage and adult life trying to escape the emotional and physical proximity of his dad Arnie, at his dad’s funeral two years ago, he was handed an envelope full of manuscripts and stories his dad had written. Until taking this moment, after his father’s death and decades away from an abusive relationship, Gross didn’t really seem to care much to examine how much Arnie was telling the truth, or really who this man really was. But now, in sometimes terse, other times bemused, vignettes, Gross returns to his own life growing up with Arnie, and interestingly, lays the chapters side-by-side with the writings from his father. As the publicity photo shows, Gross looks remarkably similar to his dad, and that tension squeezes the book into a tense and captivating read, not into one person’s unique life story, but into the push-pull most of us feel with those who most define us. Gross will read from his book at a launch party, Monday, August 8, Bloomsbury Books in Ashland.

Rogue Valley Messenger: Before starting this book, how much did you know about the strained history of the Sausalito houseboats—and their defiance?

Josh Gross: Both a lot and nothing at all. I lived on the Sausalito houseboats until I was five, and have clear memories of them—what it was like to have a bedroom half underwater, to see people fishing off my porch, and the commute to the babysitter by motorboat. But I didn’t know anything about the battles waterfronters had with the county and the police over their legal status at that time. As I got a little older though, and a lot of the residents did like my parents and fled to Oregon, there were a lot of adults around for whom this was seemingly their only story, one broken out at every possible opportunity. The legends and battles grew and shrank depending on the storyteller. Sure, they said that the police showed up and started towing people’s houses away and were fought off by angry fisherman, but it largely came across as a you-had-to-be-there series of tall tales. It wasn’t until pretty recently, when I saw my communities strangled by the same sort of gentrification the houseboats were struggling with that I started to look deeper into the conflict. When I did, the parallels were fascinating. Especially since back then, they were happening on the high seas.

RVM: You had spent a lot of your teenage and adult life distancing yourself from your dad. But this project brings you directly back in touch with him, and his past. That must have stirred up some ghosts for you?

JG: Yup. That’s why I thought it would make an interesting book.

RVM: Writing, music; these were certainly elements in your dad’s life. What truths do you see in the adage that the apple doesn’t fall too far from the tree—and how much did researching and writing this book change that assessment about how far/close you’ve fallen from your dad’s tree change?

JG:  I’d say that it is true the fruit fell a bit close to the tree in that we both pursued a life of professional creative expression—a twin fate with many emotional dimensions—but I’d tweak the metaphor to say that what fell out of his apple tree was an orange. My father and I didn’t speak the same language. Generationally, culturally, or creatively. And that was made more clear to me than ever while researching this book when I came across the story of his trip to visit Dr. Hook and the Medicine Show in their recording studio. It wasn’t just me. He didn’t understand anything about how musicians communicated. Even he was aware it was a foreign language to him. When I delved deep into the music world, it was something he really couldn’t wrap his head around at all, and it really deepened the wedge that was already between us because it was another example of how he didn’t really view me as my own person so much as an extension of his genes, but it was one that was totally alien to him. There’s a whole chapter in the book devoted to that subject, and reading his interview with Dr. Hook was pretty illuminating.

RVM:  How did you discover your dad’s writing?

JG: A thick manila envelope of it was given to me at his funeral. Before receiving the packet, I thought his writing was more myth than manuscript. And that was one of the main reasons we didn’t get along. I saw his self-professed identity as a writer as something he hid behind to avoid taking any responsibility, an opinion bolstered by the fact that he never seemed to write anything. I was incorrect, hence the premise of the book.

RVM: It is a powerful choice to lay your own writing next to your dads; sort of a sum is greater than its parts equation?

JG: Let’s hope so. Otherwise, it’s kind of a crappy premise for a book. BUT SERIOUSLY…no. Not really. The decision to structure the book as a back and forth between his archival writing wasn’t just to double up, but to bring readers along on the same journey I was on, using his pieces as a springboard to explore our history, and to honor him by finally letting them see print. However, you’re right in that the effect was broadened perspectives and a richer overall story.

RVM: Would you say that reading his writings brought more insights—maybe even empathy—for your dad?

JG: Flip to the back page in the bookstore much? I’m not giving away the ending other than to say, it turns out my father really was Tyler Durden and we were on Earth the entire time.  Beyond that, you’ll have to read it for yourself.

RVM: What do you think your dad’s review of this book would be?

JG: Based on experience, I think he’d say it’s great, then rewrite it to be something else altogether without telling me, but leave my name on it, then not understand why I am upset. Which is why this book is even a thing in the first place.

In Spite Of, and Because Of: Writer Josh Gross’s Releases His Memoir The Funeral Papers