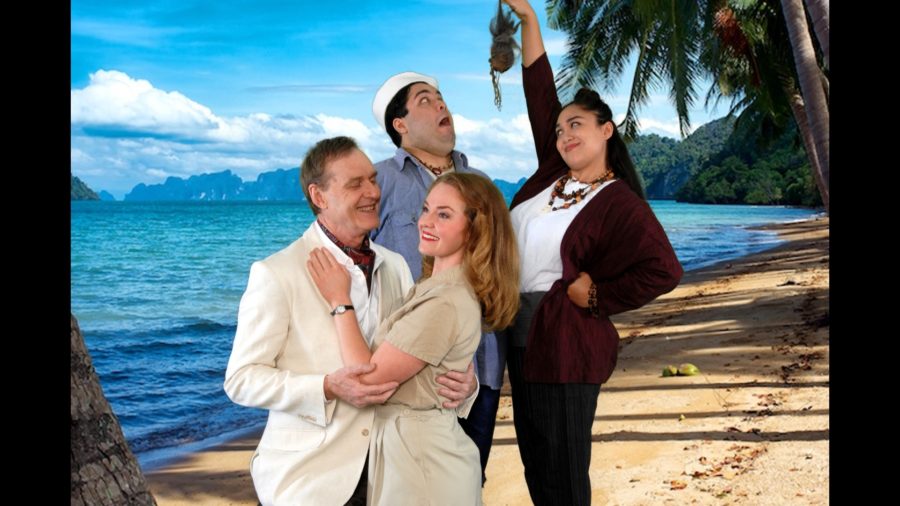 Prejudice and racism have been a hot topic this year, and every year, really, since humans began arbitrarily deciding that certain features or lineages made them superior to others. That’s why the South Pacific musical, composed in 1949 by Rogers & Hammerstein, is still relevant today, 67 years later. Showing November 30 through January 8 at Camelot Theatre in Talent, it is a story of love impeded by prejudice, set during World War II on a fictional island in the South Pacific.

Based on the 1947 novel Tales of the South Pacific by American author James Michener, the story pulls from real-life experiences and characters that Michener encountered while stationed in the Treasury Islands during the war. As military allies make an island-hopping push toward Japan, two love stories unfold that will address the question of whether love of an individual can be stronger than conditioned derision of a group.

“This is a very relevant message to what is happening right now,” says director Daniel Stephens, who has been involved with Camelot Theatre for twelve years and worked with Oregon Shakespeare Festival for nine seasons.

The story spotlights the internal conflict of an American nurse, Nellie Forbush (Stephanie Jones), as she struggles to accept the mixed-race children of her newfound love, French plantation owner Emile De Becque (Don Matthews). A second love story features Lt. Joe Cable (Eric Solis), a U.S. marine who has been assigned to scout the movements of the Japanese on a neighboring island. Cable meets a Tonkinese woman called Bloody Mary (Beatriz Abella), who introduces him to her daughter, Liat. Liat and Lt. Cable fall in love, but once again, prejudices threaten to ruin a beautiful thing.

Director Stephens references one particularly poignant number, “You Have to Be Carefully Taught,” sung by Lt. Cable as he tries to figure out why it is that he believes he can’t marry Liat.

“You have to be carefully taught to hate and fear,” Stephens says. “He’s figuring it out in that song.”

Abella, a first-generation Filipeno-American, brings an additional cultural aspect to this particular production of South Pacific with the introduction of candle dancing.

“Candle dancing is primarily a Southeast Asian dance form, popular in countries such as Vietnam and the Philippines,” explains Abella. “With a traditional courtship version of this dance, the movement of the candles are meant to emulate the flickering of fireflies in the evening as they search for a mate.”

Abella says portraying Bloody Mary has helped her get in touch with her own heritage. “My great-grandfather was an American soldier that was stationed in my great-grandmother’s hometown. I see a parallel between them and the interactions between Lt. Cable and my character’s young daughter, Liat. Bloody Mary is a beautiful character and I’m grateful for the opportunity to delve back into my culture and history to get to know her, and myself, better.”

While the themes of racism and prejudice are no laughing matter, the musical offers comic relief in the form of Billis, an American engineer and entrepreneur acted by Erny Rosales.

South Pacific is considered to be one of the greatest Broadway musicals of all time, having run for 1,924 performances and received critical acclaim for its progressive message on racism.

Will love win? That’s what many are asking now, in a nation politically and ideologically divided, and this timely production has an answer. “Despite our biases or prejudices, we can overcome them,” says Stephens. “The most important thing is love.”