In His Blood: Grants Pass Guitarist Honors a Musical Heritage 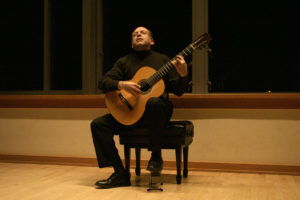 “They have long poles, filled with guitars, the little ones at the top, and when I was five I saw one of them and I knew; I wanted to play the guitar,” he says.

Recognizing his desire, his family quickly immersed him in the art of classical music.

“In Latin America,” he explains, “it would be surprising to find a household without a guitar—it’s natural, at any social gathering, that people will just come out and start playing the guitar.” He adds, “and as a teenager, while most of my friends would go to dances, I would go to concerts and hear high-quality music, written by family because they are classically-trained professionals.”

Cordero is also a long-time genealogist and has recognized music’s far-reaching influence in his lineage.

“By learning about my roots and the history of my people, I see how I connect with my musicianship, and this made me realize how it is in my blood,” he says. “Everywhere in my family I have musicians and composers—it was just embedded in my system.”

“We had a family reunion in Guanajuato (Mexico) for one whole week and each night of the week a different family member performed a concert,” he says. “The opening was a family performance and the whole city was invited—being raised in this kind of an environment is a unique experience that I enjoy and promote.”

Wanting to bring his rich, cultural background and musical family to Southern Oregon, Cordero is hoping to host a family gathering in Grants Pass.

“There seems to be things to learn about Mexico that are not necessarily mainstream here,” says Cordero, who is also a Spanish teacher at Grants Pass High School. “I feel like I am an ambassador here for this other side of Mexico most don’t know, and I’m sure that if I bring my family here people can see what I’m talking about.”

While completing university studies in Guadalajara, France and California, Cordero says he got the opportunity to perform alongside some of the greatest guitarists in the world.

“Every performer, from the beginner to the most accomplished, is nervous,” he says. “If you learn how to channel that nervousness into producing the best you can do, in terms of the emotions, then you can create this synergy between you and your audience, and when you see the joy this produces in an audience, it has no comparison.”

After moving to Grants Pass in 2000, Cordero wrote “Echoes of the Rogue River,” which he dedicated to the community for the warm reception he received. Among his compositions are a song written for Lady Diana after her death and a love song for his wife when they were dating, called “Fly With Me”.

“When I compose I feel like I get to discover something that is already there, as though I was underneath it as it was passing by and I just grabbed it and gave it shape,” he explains. “I feel I am creating a sense of beauty, and if it makes someone’s life better, that’s all I want.”

Although his performances have stopped while he heals from a fingernail condition, Cordero continues to produce family heirloom videos accompanied by his music and compose more songs which he aims to actively promote for the film industry.

You can listen to his music here.

In His Blood: Grants Pass Guitarist Honors a Musical Heritage