Home»Sound»Music News»Hurt So Good: The Scott Pemberton Band Is A Like A Kick To The Head
Music News/Sound

Hurt So Good: The Scott Pemberton Band Is A Like A Kick To The Head 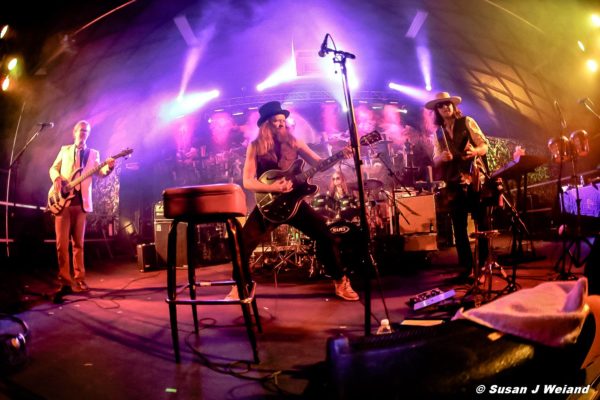 Portland native Scott Pemberton is part guitarist, part stuntman; utilizing unconventional playing methods and an array of percussion instruments along with bassist Jack “The Stabilizer” Johnson, keyboard/multi-instrumentalist Rudy Slizewski, and drummer James Sissler, to ensure that The Scott Pemberton Band’s musical kung-fu is anything but “the typical jam band.” And on Thu., February 8, at The Talent Club, Pemberton and company will be returning to the Rogue Valley.

Most bands stop in the Rogue Valley because it’s a convenient pit-stop between Portland and the Bay Area. But convenience isn’t the only reason why Pemberton keeps coming back.

“We like The Talent Club,” says Pemberton. “It’s nice when the owner likes the venue. They are more hands-on when it’s their baby. It’s not the biggest club and not the fanciest club, but it’s got heart. We never would have stopped in Talent, but Larry [the owner] hit us up. He’s providing a real high-level of art for the community. Which is why the bands like it, because it’s like a community and we’re a part of it.”

Pemberton has a unique approach to the electric guitar, and never uses a guitar strap.

“I play the guitar kind of funny,” says Pemberton. “I lay it flat like a keyboard. Not using the strap leaves me the ability to lay it flat. A strap has its value, but being able to change-it-up quickly does also.”

Playing jazz in a rock n’ roll band comes naturally for Pemberton, and gives the music an eclectic element.

“I was like a rock musician through high school, and in college I went pretty much jazz,” says Pemberton. “Whatever you call this music we play, it’s without a style. It’s rock; jazz; surf music; rockabilly. I think it’s the only way to be pure. Nobody hears art the same way. If stuff is going to fit within a genre you have to force it; you have to make it fit. But the music we play doesn’t fit in boxes.”

Jazz is an integral part of Pemberton’s musical existence. The improvisational element means that no two shows are ever the same. Pemberton’s latest album, Game Tapes Vol. 1, is a live album; and it is a document of the band at this moment in time.

“It’s like a jazz band right now,” says Pemberton. “The flesh we add to the songs varies night to night, so I thought a live album would be the best way to capture it. There are some songs on there that have been on some studio albums. I have two live albums and two studio albums. I enjoy the live, with the bumps and bruises. The faults is what makes it better.”

Pemberton freely admits it isn’t super-marketable. But marketability isn’t as important to Pemberton as creating music that connects with the audience.

“Make it super-real and everything else will just work out,” he says.

Hurt So Good: The Scott Pemberton Band Is A Like A Kick To The Head