How to Fundraise with Donkeys and Basketballs: Fifth Annual Donkey Basketball Game 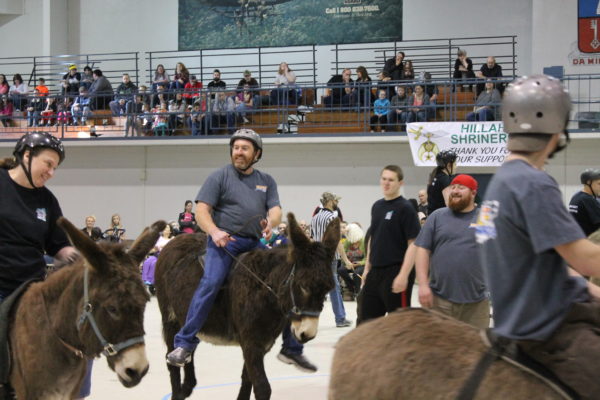 In a warehouse-sized building spectators laugh and cheer as a basketball soars through the air and hits the backboard. Instead of hearing sneakers squeak on the court, the audience hears a donkey trotting for the rebound. Yes, the fifth annual Donkey Basketball at the Medford Armory will be held on March 24, put on by the Medford Hillah Shriners.

Donkey Basketball is “a fundraiser to help support Hillah Shriner locally here in Medford,” says Fundraising Coordinator Donald Wetzel. Medford’s Hillah Shriners covers Eugene and stretches into California. Throughout the year the organization hosts and organizes several events in the Rogue Valley and participates in the Pear Blossom Parade.

“We’re always looking for new ventures to do fundraising for the Shriners,” Wetzel says. “It just worked out that they were doing donkey basketball and donkey softball in different places around the state, and we just decided it was a good venue for us because it would give us a good place for the public. As far as putting the event on, making sure everything is set up. We all do it ourselves. It’s all Shriner coordinated.”

Last year he was the organization’s Potentate, or leader, serving a one-year term. Along with being Fundraising Coordinator, he is also the Recorder. “I enjoy helping people as well as being involved with people of all ages,” he says. “As a retired officer in the US Air Force and a former business owner I enjoy being busy with and around people.”

“I meet a lot of people who have never heard of Donkey Basketball or have never seen a game,” he says, as if talking about curling or biathlon.

Okay. Let’s STOP THE PRESSES for a moment. . . let’s take a news break in here for a moment: DONKEY BASKETBALL!

Yes, it is a “sport.” Players ride the donkeys, and/or sometimes drag them down the court. It is an absurd game that dates back to the 1930s when basketball was less about the NBA and more about barnstorming teams with gimmicks to entertain. Of those years, more noble and talented incarnations still exist; perhaps most famously the Harlem Globetrotters, well-known for their talented and showboating players. Of the less noble and less talented, donkey basketball, which PETA has a few words to say about it.

Donkey basketball has managed to hang on, primarily as a fun-spirited fundraiser in communities around the country. There rules are and are not dissimilar to regular basketball: Players shoot baskets. But do so riding donkeys. Dribbling isn’t required and traveling isn’t a concern. Staying on your mount, however, is a unique problem.

This year, the donkeys will be ridden by members from the Medford Police Department, squaring against players from Fire District #3.

“I think the public enjoys the adventure because they are community minded as well as looking for alternate forms of entertainment at a reasonable price,” says Wetzel.

The winners get a trophy and bragging rights, and all proceeds help Hillah Shriners benefit children in need. However, winning or losing isn’t really the point at an event created to entertain the audience and raise funds to help children in need.

$8, adults and children over age three

How to Fundraise with Donkeys and Basketballs: Fifth Annual Donkey Basketball Game