Home»News»Home Sweet Home: Ashland continues to struggle to finding footing for a solution about a burgeoning homeless population
News

Home Sweet Home: Ashland continues to struggle to finding footing for a solution about a burgeoning homeless population 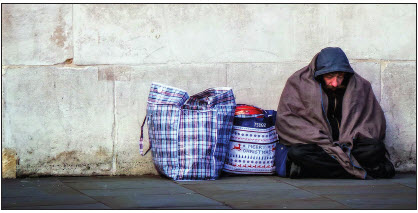 On any given night in Ashland, there are an estimated 300 homeless men, women and children. It is a high number—especially so when considered what a hefty percentage of the general population that represents, and that compared as a ratio of the general population to other cities, like say, Portland or San Francisco, both notorious for a large number of homeless, it is more than double rates in those cities. Overall, Oregon is reported to have the highest percentage of homeless children in the nation.

By no means is homelessness a new problem in Ashland—just some five years ago the city was stressed by a camping ban—but the problem seems to be coming to new crossroads as city leaders try to balance tolerance, compassion and frustration.

On Wednesday, October 28 (after press time), the Ashland City Council convenes a “listening session” for residents to express concern and compassion about the burgeoning homelessness population.

“I see this as an opportunity to listen to all who would like to share their views about experiences in our town with regard to behaviors they have encountered that make them feel afraid, harassed and uncomfortable, particularly in the downtown,” explains councilmember Stef Seffinger. She adds, “It is also an opportunity to hear what people feel could help this situation.”

Seffinger was elected to council in 2014. She has a decades-long professional history working with at-risk youth and served as a counselor at Ashland High School. She also produces glass artwork, which is sold at galleries. She sees both sides of the argument—that many homeless need social services as well as business-owners want attractive shopping districts.

“Tourists have started posting on social media sites that they will not come back to Ashland due to their experiences downtown,” explains Seffinger, listing off grievances from public urination to snapping dogs. “It is important to have this image of Ashland corrected. Our tax base is an important part of being able to provide the services that make our town special and able to give to all our citizens.”

At the same time, Seffinger decidedly recognizes that the City has both a responsibility and an ability to help solve the problem—which does not just mean sweeping away homeless.

Several years ago, camping bans and sit-lie ordinances were presented by elected official as popular solutions; in Ashland, though, those practices pushed up against a more general feeling that there are more considerate and sustainable solutions. In 2010, after police used the camping ban to chase homeless men and women out of Lithia Park, protestors filled downtown for a week with signs reading “It’s not a crime to sleep” and “homeless but human.” As routinely, those ordinances brush up against constitutional limitations and are wiped off the books. Cities like Portland and San Francisco have abandoned those ordinances as a means to managing homeless populations, and in recent years have been searching more for long-term and considerate solutions.

Likewise, it seems as if Ashland is leaning towards that direction.

“Ashland is one of the only cities I am familiar with that provides social service grants from the general fund to partner with nonprofits and other organizations,” points out Seffinger. “The city also offers programs to help citizens who are struggling with becoming homeless, such as assistance with utilities, bus passes, fuel assistance, senior services such as food and friends.” She concludes, “The issue of homelessness is a complex one with no one size fits all answer.”

One of the organizations that has stepped into help—and also benefitted from funding from the City of Ashland—is Options for Homeless Residents of Ashland (OHRA). Formed three years ago, OHRA was organized by a group of local lawyers, engineers and real estate brokers, and offers a spectrum of service, from immediate help like a mobile shower or warm clothes, to long-term solutions like job training or rent assistance. In February 2014, OHRA opened the Ashland Community Resource Center, possible in part because of a $100,000 grant from the city of Ashland.

“We always offer warm coffee and the hope for a more secure future,” summarizes John Wieczorek, OHRA Board president. “Homelessness is a complex issue; each person brings their own set of variables,” he continues.

But, points out Wieczorek, providing stability is a solution that is helpful to most. “Supportive housing stabilizes them first, and then issues of employment, mental health, and addiction can be addressed,” he explains. “This model is often referred to as housing-first. It’s been successfully done in Salt Lake City and elsewhere, and has proven to be more cost effective than leaving people on the streets.”

Wieczorek adds, “The cost of housing someone first, and supporting their journey to self sufficiency, is less expensive than the costs to law enforcement, emergency rooms, criminal justice system and other systems if they are left un-housed.”

On November 7, OHRA will host its second “sleep over,” where members sleep outside as “a gesture of solidarity,” explains Wieczorek. “Community members sponsor our efforts and the funds go towards the services we provide.” To donate, check out HomelessOptions.org.

Home Sweet Home: Ashland continues to struggle to finding footing for a solution about a burgeoning homeless population