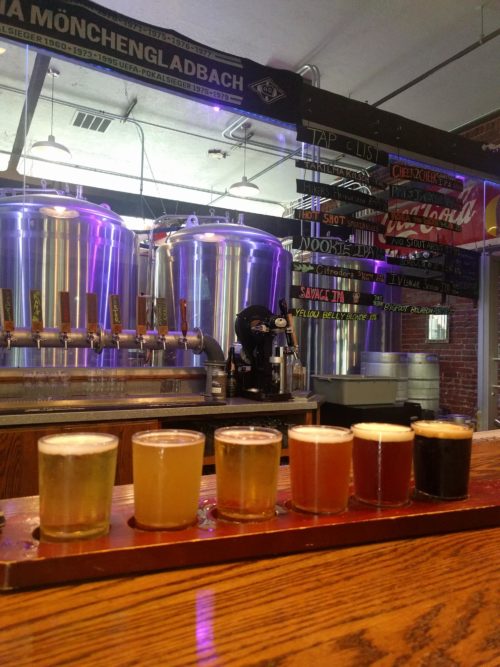 I got my degree in History. This does a few things for me. 1. It makes me really excited at parties when people bring up things like the Holy Roman Empire (and consequentially I rapidly kill any conversation). 2. Everyone thinks I’m great at trivia since, apparently, a history degree means I know everything that happened before today. And, 3. I really, really like things with a rich history. It’s why I chose my cat. Sure, she has the general disposition of a raved lunatic, but I liked the way all of the vet techs said, “Oh, her?  Yeah, I’ve got a few stories about her.”

It’s also part of the reason I came to appreciate Climate City Brewing Company. Located on G Street in Grants Pass, Oregon, Climate City is a brewery that shares in its city’s long history. The building was originally constructed in 1886 (for reference, that’s a mere 21 years from the end of the Civil War). It was Rogue Brewing in its original conception, but the brewery (and town) fell on hard times. After a generation it was opened back up, only to fall victim to Prohibition. But, Americans being Americans, they wouldn’t let something as pesky as “laws” get in the way of good drink. So naturally, they dug a tunnel under the building, where it eventually led to a speak easy where liquor flowed freely. How cool is that? The bartender, a guy named Tyler, greeted me with a big smile. I ordered a sample tray and dove into their beers.

Most of the beers I had were what (I think) were more of their staples. Or at least, the less experiment-y varietals. Strict lagers, stouts, IPAs and pale ales. I thoroughly enjoyed their Yellowbelly Blonde, a beer with a small hop flavor that balanced well with malt and a bit of floral flavors. It was very refreshing. I could see why their Nookie IPA was their flagship and best seller—a confident IPA that hit all the notes an IPA should. Their No Stout About it Stout was rich and creamy. A chocolate-y ale that tasted great as a dessert beer.

But the one that took the cake for me was their Maracuya Gose. A Passionfruit sour. Sitting at 18 IBU and a manageable 4.5% abv, this beer went down like water. The AC in my car (an arena that had recently taken the life of my sunglasses) was not working, so the long drive from Ashland to Grants Pass was hot and smoky. This beer did more than just imbibe, it lifted my spirits and quenched the thirst I had built on the drive over. Its flavors were light in all the right places, mild passionfruit, but enough to get flavor. Not watered down. Had I not had to drive back home, I probably would have ordered a pitcher just for myself.

I left Climate City feeling satiated. The beer was delicious, that atmosphere great and the service staff was top notch. I have a feeling that Climate City Brewing will be adding to its building’s already rich history, for many years to come. Better yet, now I have another historical factoid I can use to alienate partygoers the next time the word “Speakeasy” is mentioned.