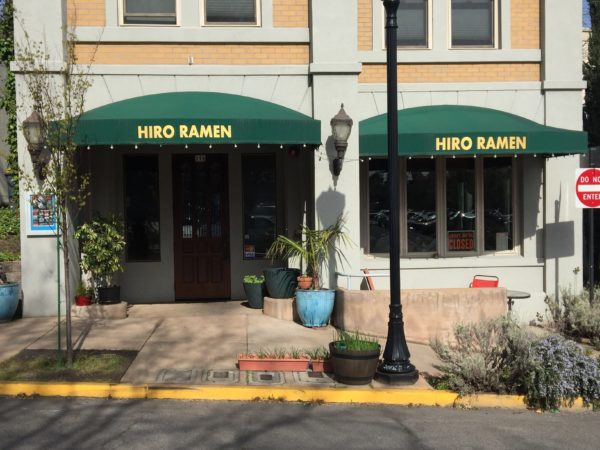 Truth told, the rise of Ramen has always confused me a bit. As a growing boy that preferred to measure his food by the pound, rather than the bowl, the idea of soup for dinner seemed… Lacking.

Lacking what? Everything beyond being hot that made it a satisfying meal. The first time someone invited me to Pho, I thought they were kidding.

“On the bone in the soup,” they said, peaking my interest. Thankfully, my tastes have evolved a bit since the caloric black hole days of high school.

But Ramen still feels lacking. Perhaps—and I’m just throwing this out there—like it’s something that you can get at the grocery store ten for a dollar?
And the first few times I tried “real Ramen,” that was kind of the case. There were no fancy noodles like in udon, and the garnishments were pretty wack compared to the plate full of accoutrements that comes standard with any bowl of pho.

Hiro Ramen, which opened in Ashland in the old Eleven space at 11 N. First St., has turned me around a bit. The atmosphere is bright and cozy enough to feel just right for a bowl of soup, and is just the kind of locals hole that Ashland sorely needs more of. Like everything in downtown Ashland, it feels about 10 percent too expensive, but the entire menu is still affordable enough to eat there on whim, not as a special occasion.

The ramen, comes with your choice of rich hearty stock, and then a variety of proteins, and a selection of fresh, hand-cut veggies. I usually leave hoping for a teensy bit more protein, but glad to have had a meal that might help the belly I used to so delight in watching grow recede just a teensy bit.

And for those “eating-your-feelings-days” when soup won’t cut it, there are a variety of rice bowls, including the best of downtown Ashland’s three bibambops.

When going for soup, this reporter recommends the pork with Miso stock, but I’ve been pleased every time I’ve pretended to go vegetarian for a hot second and had the veggie stock. It is loaded.

However, my standard at Hiro Ramen, is the bulgogi bowl. The Korean beef dish is rich, tangy, and never fails to satisfy.

My only real complaint about Hiro Ramen is that they recently started closing at 8:30. I’m sure it was the right move financially, but it doesn’t dovetail quite as nicely with the nine-o-clock-hour movie start times at the Varsity around the corner as the previously, slightly later hours. Perhaps summer will turn things around. Because what’s better in summer than a steaming hot bowl of soup? When the primary market for Ramen (college students) have all left town? Darn…

I give one thumbs up to Hiro Ramen—because there’s no way I’m putting down my spoon for something this yummers. Ramen: whodathunkit?