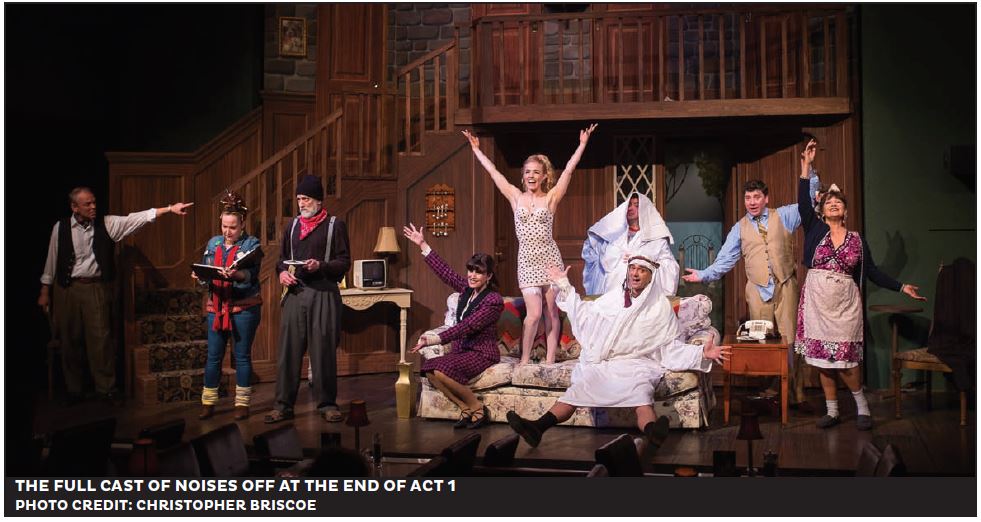 “Noises Off is well-known as a slam-bang comedy,” affirms Director (and OCT Artistic Director) Valerie Rachelle. Between crashing doors (all eight), flying props, perilous staircases, and sardine oil spills, the cast of Oregon Cabaret’s 2017 season-opening show will do well to survive all 49 performances intact.

Or, the cast’s skills and Rachelle’s choreography reflect how well they have created the illusion of mayhem. Playwright Michael Frayn’s farce, first staged in 1982, follows a provincial theater troupe’s woes as it stages its own farce, “Nothing On.” Dubious talent, cast/crew romances, and unstable dramatic personalities threaten to undermine the enterprise.

Noises Off’s first act depicts the troupe’s final rehearsal, and the tour’s prospects appear dim. The imperious Director, Lloyd Dallas, played by John Stadelman, struggles to keep the actors in-character and focused. The play is set in 1984, and a few touches on the OCT’s clever set—a push button phone with a dangerously-long handset cord–and, in costuming–a bold-herringbone-patterned, pink and black women’s suit—suggest the period well.

By the second act, a backstage view of the theater in dreary Ashton-under-Lyne, the tour has begun to unravel. The troupe’s petty jealousies and slight character flaws intensify from an atmospheric disturbance into a hurricane. The Director’s surprise return to restore calm only adds to the fire-axe-enhanced chaos. SOU alum Paul Michael Garcia (as Garry Lejeune/Roger), turns from an enthusiastic, well-intentioned thespian into a red-faced maniac. The troupe—except for Brooke Ashton/Vicki (played by Deanna Ott) who perseveres contentedly unaware of her colleagues’ collapse—abandons all hope in Act Three and self-destructs in a final performance.

OCT’s version of the durable Noises Off, as it gains momentum, inspires plenty of laughter. The verbal jousting, slapstick, and well-coordinated movements are lively and funny. Some audience members, clearly familiar with the play, chime in on famous lines, perhaps not unlike a Monty Python fan quoting favorite lines from the Holy Grail.

Presumably, unlike their fictional counterparts in “Nothing On,” the Noises Off cast will continue to synchronize with each performance and a growing feel for audience reaction. “Comedy takes the energy of the audience to work,” says Valerie Rachelle. “Audience reaction is very important to how the timing works, to how the actors react to each other.” Rogue Valley favorite, Livia Genise, plays Dotty Otley/Mrs. Clackett; Jessica Blaszak plays Poppy; and Galloway Stevens and Leah Kolb play the other two major roles, Frederick/Philip and Belinda/Flavia.

Frayn’s play challenges an audience to shift its perspective multiple times. We (the audience) view the final rehearsal for “Nothing On” in Act One from the Director’s view, perched in the balcony. He enters and exits several times before finally joining the troupe on stage. At that point, the troupe steps out of their “Nothing On” roles, and we observe the actors and their director attempting to soothe hurt feelings and save the play.

When the set revolves for Act Two (credit to Stage Manager Laura Judson), we instead view the troupe backstage (out of character but in costume) as they struggle through the scene rehearsed in Act One. Yet, glimpses through open doors and a window ask us to place ourselves in the imaginary audience watching “Nothing On” as well. Our viewpoint alternates from backstage to front-of-house.

For Act Three, we watch the scene a third time, and our split perspectives merge. Just as the actors fall in and out of character, literally can no longer find where there are in the play, we see both the disaster that “Nothing On” has become and the mental and physical collapse of the troupe. We, the audience, like the characters of Noises Off, have perhaps once had high expectations but little success. Then, as the house lights come up and the OCT Noises Off cast bows, our perspective shifts a final time. We compare notes with our companions, and we hope that the Actors Equity Association has a robust Worker’s Comp benefit.