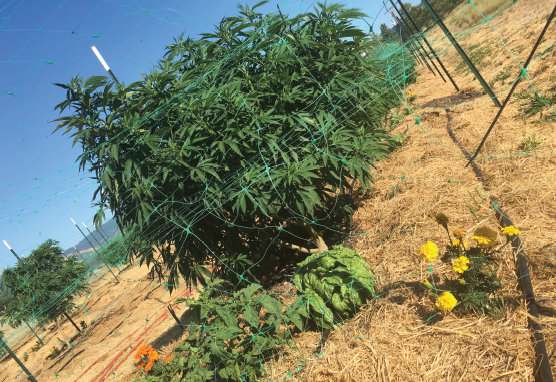 Last November, with little fanfare, Medford City Council voted 6-2 to enact a ban on outdoor marijuana grows in the city limits, a ban that would have pulled the plug on 1,942 state-licensed marijuana growers in Medford, roughly one-third of the licensed growers in Jackson County. But because the vote was not unanimous, a second reading was required.

At that second reading, dozens of opponents showed up, many wearing bright green shirts and holding chlorophyll green signs reading, “Let the people grow.” The protests were effectively a goal line stance: Already the proposed ban had garnered a solid vote, and there was no reason to think anyone was changing his mind. Yet, in a remarkable about-face and a change of heart, the mayor and city councilmembers considered the strong opposition to the bans, and ultimately, with a 7-1 vote suggested that the matter by turned over to the voters.

From one vantage point, they punted the decision to the voters, and from another perspective, they decided to let democracy determine the outcome. Either way, like a series of bad Halloween movies, city council’s decision last November sets up yet another sequel for the legality for marijuana in Medford in this November’s election in the form of three separate voter initiatives for this November ballot: 15-144, which would prohibit the establishment of marijuana retailers in Medford; 15-166, which would prohibit outdoor recreational and medical marijuana grows within residential areas, and, 15-145, which would imposes city tax on marijuana retailer’s sale of marijuana items, assuming that voters hadn’t banned those retail sales.

The proposed growing and retail bans are the latest in a series of legal wrestling over marijuana in Medford; in 2013, city council voted unanimously to ban dispensaries and the vote on Measure 91 to legalize recreational use of marijuana was evenly split in Medford, with just a handful of voters more on the opposition side. In addition, two years ago, Clay Bearnson was elected to Medford city council; it is believed that he represents the first marijuana grower to be elected to a governing body in Oregon.

The outcome for the upcoming votes is far from clear. Three years ago, the vote for Measure 91 in Medford was almost precisely 50-50, with a handful more voters in Medford opposed to legalizing recreational marijuana.

Yet, in spite of the strong public feelings against the ban, as displayed last November in council chambers, and equally strong feelings to ban marijuana grows and retail sales, the matter—and campaigns for and against—have largely been silent.

“It’s surprising to me that after all the debate that has happened on these issues since I’ve been on the Medford City Council, that I have not seen anything such as ‘No on 144’ or ‘Yes on 166’ signs,” remarked city councilor Kevin Stine, who was one of the two votes voting against the ban in the first round, and told the Messenger he plans to vote against both proposed bans, and for taxing retail sales.

One of the more persuasive arguments for legalization of marijuana two years ago was the economic benefit. (Since the start of the year, Oregon has collected more than $25 million in taxes from the sale of recreational marijuana.)

“Obviously if the voters vote against a ban on dispensaries and for the tax measure we will have another source of revenue,” explained Stine. “People that live in Medford and want to purchase recreation marijuana do so; they just go over to Ashland, Talent, Gold Hill, Phoenix, or elsewhere,” he continued. “We aren’t stopping recreational use with our ban on recreational dispensaries. The ban just prevents [the City of Medford] from receiving revenue that these other places are getting.”

And, pointed out Stine, lost revenue isn’t the only financial impact. He also added, “If the voters are in favor of Measure 166 [banning outdoor marijuana grows], we are likely to see litigation as there is gray area as to whether the ordinance may be in violation of the Oregon Medical Marijuana Program (OMMP) and Measure 91. That litigation could be costly.”

Although there has yet to be a highly visible campaign against the two proposed bans, a loosely organized campaign is actively trying to rally support. Mandy Valencia

was one of the primary organizers rallying opposition to the city council proposed ban last November; with an active Oregon Citizens for Cannabis Rights Facebook page that boasts a few thousand members, she was instrumental in organizing the protest against last year’s city council—and is still continuing to stir up opposition to the bans.

“I am doing everything within my power to fight this,” she said in an email interview with the Messenger. But, she added, “I’m struggling to find support.”

Her biggest concern and focus is the proposed ban on outdoor grows—for both recreational and medical marijuana.

“If the Marijuana Grow Ban passes,” she explained, “the financial impact will hit our OMMP patients severely. Many grow their own medicine in their gardens or obtain it from a grower friend who does. These are low-income veterans, cancer-patients and people unable to work due to chronic pain, they do not have the resources to pay $10-15 a gram for marijuana at a dispensary.” She goes on, “The real losers here are the medical patients who have been law-abiding and able to grow their own medicine since 1998. How sad.”