Hecklers’ Delight: The Inaugural “Jefferson Joust” is Bike Polo All Grown Up 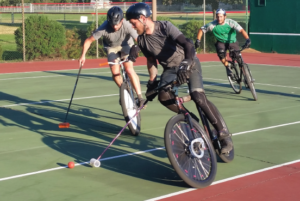 I was taking an evening walk along the bike path in Ashland a few weeks ago when I heard a strange noise. Shuffling, squeaking, grunting and an occasional “thock!” like a plastic mallet hitting a chunk of rubber. Drawn to the sodium lights of a nearby tennis court, I witnessed the strange spectacle of grown men on bicycles chasing a ball between two nets.

Not usually one for organized sports—playing or spectating—I was mesmerized by the way they stuttered around the court without crashing into each other, fusing flesh and machine toward a single objective: the goal.

“It’s like slow hockey,” said one of the participants to me after the game.

He nailed it. Unlike most team sports, this is one where an uninitiated viewer can simply walk up, see what’s happening, and get sucked into the play. That’s what organizer Eric Michner hopes you will do when local bike polo teams get together on September 3rd and 4th for their first-ever Southern Oregon tournament. They’re calling it the Jefferson Joust.

Why “Joust?” Each game begins with the players all lined up like knights on horseback, facing the opposing team at each end of the court. A bystander counts down to the kickoff, and the players are off, urging their steel horses toward the ball placed in the center of the court, mallets at the ready. The first player to strike the ball possesses it for the team. From there, it’s a simple matter of keeping it out of the mallets of the opposing team and scoring a goal.

After an eight-year struggle for legitimacy, getting kicked off courts across Ashland and having the cops called to break up their games, the Rogue Valley Bike Polo club just received official permission to practice at the tennis courts in Hunter Park last year. Now, Michner says, the group is ready to take things to the next level.

“The Joust will bring together the bike polo community here in Southern Oregon in a way that’s never happened before,” he says. The event, which will also take place at Hunter Park, will feature up to 18 teams competing for the champions’ trophy. But, Michner says, the real goal is to have a good time.

“Bike polo is very much based on fun—not so much hardcore competition,” he says. “Heckling is encouraged.”

Saturday and Sunday, September 3 and 4

The rules of bike polo are simple:

Hecklers’ Delight: The Inaugural “Jefferson Joust” is Bike Polo All Grown Up