Home»Food»Green Eggs, Ham and So Much More: We Could, We Would and We Will Continue To Eat at Newly Open Onyx
Food

Green Eggs, Ham and So Much More: We Could, We Would and We Will Continue To Eat at Newly Open Onyx 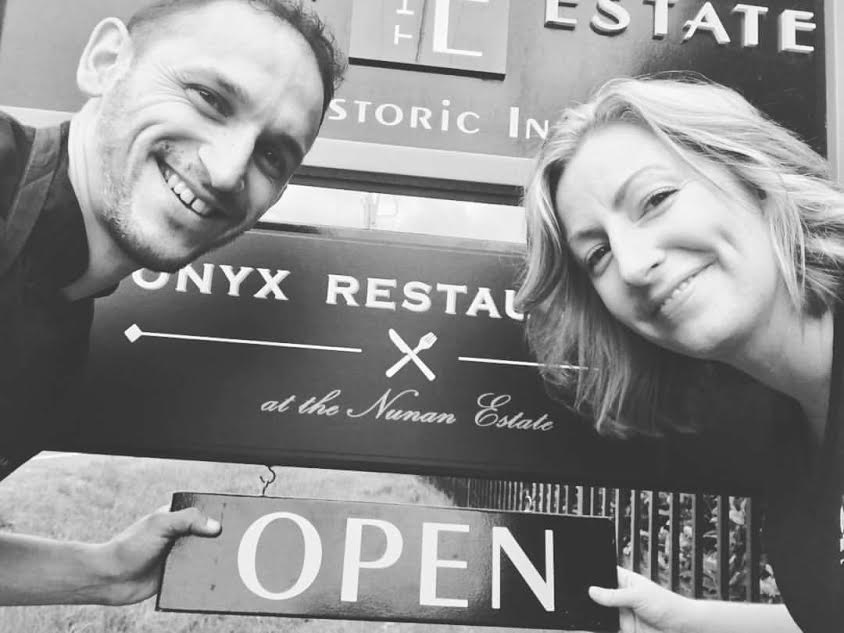 Chef Mario Chavez has been cooking in Southern Oregon kitchens for over twenty years. For each of those years, he was striving towards one thing: to have his own restaurant. In 2016, he accomplished that by opening Onyx at the Nunan Estate with his wife, Liz Chavez. Despite the stress of a first-year restaurant, the 38-year-old often finds himself thinking in awe, “I just pulled out of my restaurant,” as he leaves a shift from the historic property his restaurant sits on.

Walking up to the restaurant in winter is a bit eerie and confusing. From the parking lot, an unmarked lighted walkway leads up to the building Onyx is in, taking restaurant-goers past the unoccupied main house, which is illuminated on the outside, but not the inside. Eventually, that part of the estate will be a bustling inn, run by the Neuman Hotel Group, which owns and manages hotels throughout the area, such as the Ashland Springs Hotel. For now, it sits vacant and quiet.

Once inside Onyx, which is in a separate building, customers are greeted by a stately bar. Wood cabinets hold rows of alcohol, and glassware. On my two visits, I dined at the bar and in the main restaurant, where the giant onyx bar that the restaurant is named after wraps around Chavez’s kitchen, giving diners a chance to watch him work while they eat. Since I was reviewing, I opted for a table in the corner when I ate in the main room.

The one thing I found to be inconsistent was the service. On my first visit, the person managing incoming guests told me to grab a table wherever I liked. Once seated, it took over ten minutes for me to get a menu, longer for a glass of water. The server seemed confused when he eventually saw me. “Can I get you something?” he finally asked. It’s hard for a busy waiter to recognize someone needs help when they don’t have a menu in their hand, which is usually a signal to the server “Hi, I’m your new table, I need to be helped.” It’s possible this was just a miscommunication or perhaps the host called in sick. I’m especially inclined to blame it on that, because from there on out, he was a stellar server. At one point, he gave detailed instructions on how to reheat the specific leftovers I had to achieve the best results. Similarly, when I sat at the bar, the service was excellent, save the part where I had to order my drink twice, which again was just due to miscommunication between the two people behind the bar. 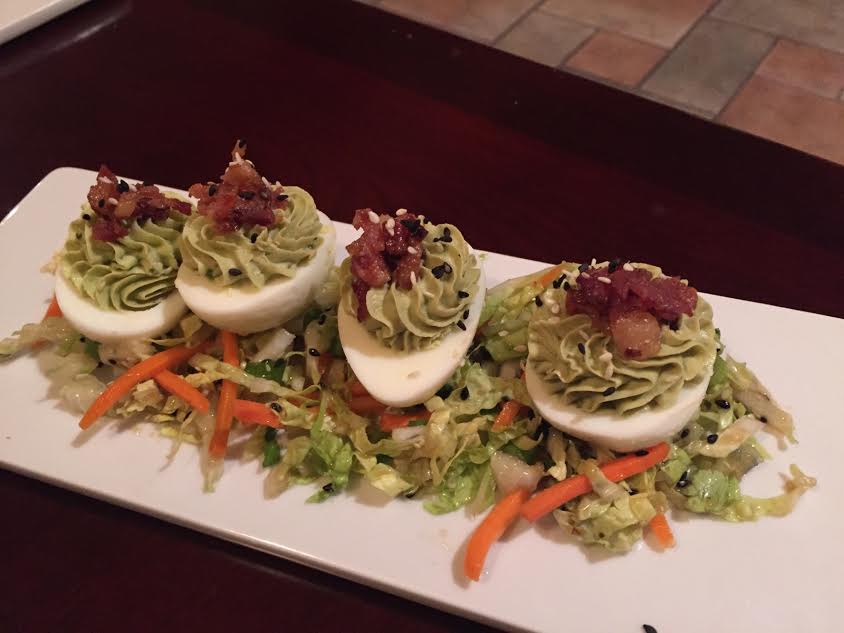 The food is where Onyx undeniably shines. Chavez had no intention of serving run-of-the-mill food patrons could get elsewhere in town when he opened Onyx. Instead, he based his menu off his own inspiration, making his goal to be a restaurant that he would want to eat at. His menu skews Asian, a hat-tip to the Asian culture of Southern Oregon. However, his fondness for comfort food is also pronounced. It’s visible in his dessert menu, which includes milk and cookies (“Who doesn’t have that memory as a kid of warm cookies coming out of the oven,” he says), but also in the only Mexican dish on the menu, which is his mother’s recipe.

Everything I tasted—the farm fries, the sopes, a beet salad, the milk and cookies—was good food. Although the menu was varied, each dish was expertly put together. Take the green eggs and ham, for instance. At $8, my dining partner and I were presented with four egg halves stuffed with a green filling made of egg yolk and avocado. Glazed pieces of pork belly spilled over from atop the eggs onto the plate, adding a rich, salty-sweet punch to the dish. It would be easy to put quick, simple items on the small plates menu, but as seen in the eggs, Chavez pours detail into even his smallest dishes.

The surprise for me was Chavez’s wings. The tell-tale of well-cooked wings is that while they may arrive dripping in sauce, they contain perfectly-cooked, tender meat and a crispy coating. Soggy is NOT the name of the game. Chavez accomplishes this balance of crisp yet saucy with his wings, which are Beijing-style in a salty-sweet Asian sauce. It felt weird to me to dig into the messy dish in what I saw as a fancy Jacksonville restaurant, but with three TVs mounted on the walls throughout the lounge it’s obvious Chavez is also trying to fill a niche—providing quality food to those who want to catch a game or stop in for a plate of food without having some special occasion. However, the one thing the bar is lacking is a cocktail menu. As it stands now the bar is “order whatever you want.”

When it comes to prices, Onyx hovers somewhere in the mid-range. On my first visit, my partner and I had a feast, ordering a total of six items including dessert and appetizers, and ended up with a bill of $66. On my second visit, I ordered a salad, wings and a beer for under $20. For the kind of cooking Chavez is providing, it’s a good deal.

Minus a few hiccups with the service, Chavez seems to be a fantastic job. I look forward to seeing what he brings to the menu in spring, when spring produce becomes bountiful and the warm weather allows for relaxing sunsets on the porch, overlooking the Rogue Valley with excellent food. A note: Chavez changes the menu often, so find what you like and order it as much as you can, because soon he could be serving something completely different.

Green Eggs, Ham and So Much More: We Could, We Would and We Will Continue To Eat at Newly Open Onyx