This Ain’t Yo Daddy’s Rock and Roll 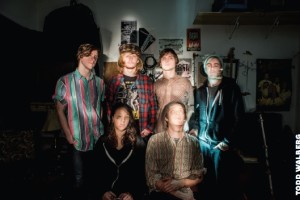 There’s a standard songwriting model for rock bands. One member stays up late at night with an acoustic guitar, strumming out some chords on the couch, and scribbling notes on a scrap to paper, to later be given to the band at large.

That’s not really the case for Portland psych-rockers, Grandparents, who will soon be playing two Southern Oregon shows.

“A lot of our writing happens through recording,” Dylan White, guitarist and vocalist for Grandparents, said in a press release. “Because of that, a lot of times the gear will manifest itself in the music too, because we’re interacting with it while we’re writing.”

And while garage bands everywhere are reveling in the techno-future that turned any laptop into a self-contained recording studio, for their latest effort, Grandparents stuck to their namesake, and decided to go old-school with that sound-manifesting gear, eschewing the bright and shiny of digital for the studio experimentation of decades past, plugging this into that and that into something you don’t even want to know about, just to see what happens.

“One of the fuzz guitar tracks we literally plugged into a broken reel-to-reel and then into the board,” says White. “It sounded crazy so we went with it.”

Two years of mad science later, the band emerged from its warehouse rehearsal space with Sincerely Bagman, a collection that takes the lo-fi garage-pop of its early EPs in a glittering new direction, half Brit-pop with bubbly melodies, jangly guitars, and go-go ready grooves; and half acid test, with wells of reverb, drums that roll into the ear on waves of echoes and melodies shimmering with vibrato. And so far, that approach has translated into a pretty solid trajectory for the band with national tour dates and festival appearances a plenty Amongst many others, 2015 has seen Grandparents performing at Treefort, Pickathon and SXSW.

“We’re trying to take all these influences and make something more forward-looking,” guitarist Will Fenton said in a press release. “This is the future, you know? I’ve got a computer in my pocket. What should music sound like?”