Home»Culture»Got Drama? Barnstormers Theatre Invites the Audience to be Involved in the Shenanigans
Culture

Got Drama? Barnstormers Theatre Invites the Audience to be Involved in the Shenanigans 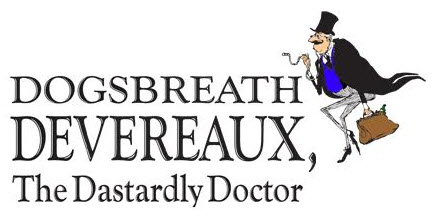 Sometimes just sitting and watching theatre isn’t enough for the truly involved spectator. Instead of throwing popcorn, Barnstormers Theatre in Grants Pass wants the viewers to join in the fun on stage for their final weekend of their annual summer melodrama Dogsbreath Devereaux, the Dastardly Doctor on August 10, 11 and 12. We caught up with director Amelia Caldwell, to get the inside scoop on the drama.

Rogue Valley Messenger: Please briefly describe what a melodrama is and why this type of theatre is a good fit for Barnstormers?

Amelia Caldwell: A melodrama stands out from other shows for a very fun reason. When you go to a normal play, it’s like watching TV; you can knock on the screen, that “4th wall” between you and the actors, and there’s no reaction. In a melodrama however, we tear down that wall entirely. There’s a great deal of audience/cast interaction, and it makes for a lot of fun! A melodrama also always has a very familiar plot line and cast. There’s always a nefarious villain, out to cheat some poor old widow out of a fortune after doing away with her, and a lovely young woman the villain aims to wed. There’s a hero to save the day, and a slew of comedic characters in-between to keep the laughs rolling.

RVM: Barnstormers has put on a melodrama every summer for the past few years; what makes Dogsbreath Devereaux stand out?

AC: I selected this particular script because unlike most melodramas, which are set in the old west, Dogsbreath Deveraux is set in a 1940s/1950s hospital in New York. It really makes for a fun, interesting new setting that was a blast to design the set for and really makes for a fun show.

RVM: Have you participated in the summer melodramas before, and in what capacity?

AC: I’ve been involved with the melodrama since we first started doing them, I performed in the first two, directed the third, and now the fourth! I was asked to direct the show last year because I’d been so involved and passionate about being in the first two and they were looking for someone to direct the 3rd. I was asked back again for the 4th, and was only too happy to accept… the melodrama is my favorite part of the year!

RVM: What has become your favorite part of this show as it has developed on stage?

AC: Working with a new cast. In the past, the melodramas were hand-cast. In the sense that, the director would pick their cast without holding auditions. This year, we decided to hold open auditions for the show and I had a really phenomenal turn out. We got to bring in some new people, not only to melodramas, but to Barnstormers itself and there’s been fantastic chemistry between everyone and it’s been truly a joy to watch the new faces get as addicted to my favorite little theater as I myself am.

RVM: Does your cast have experience with this type of theatre, and how has that helped or hindered the performance?

AC: It’s actually been quite a mix! We do have a few returning performers, who have acted in one or several of the previous melodramas (Kent Prickett returns for his 4th melodrama, Julie Imhoff for her 2nd, Madeline DeCourcey for her 2nd, and Josh Kennedy as well.) But, the majority of our cast are newcomers. A couple of done melodramas before, Stephen Kostrna has directed a melodrama for a middle school before, but most are completely new to it. I chose them all though for their natural wit and skill with humor, and the fact that they already enjoyed the slapstick comedy that is second nature to a melodrama actor. There hasn’t been any hindrance at all getting them comfortable, they were killing it from the get go!

RVM: Which is your favorite character and why?

AC: Well, going into the show it was Nurse Ivy Dripp. I enjoy the style of humor her character is written with, and while she’s still a particular favorite, Nurse Hilda Hatchet has really been brought to life by the actress we cast for her and is now my new favorite.

Got Drama? Barnstormers Theatre Invites the Audience to be Involved in the Shenanigans