For our Wine Issue, we’re trying a bit of sophistication and culture. How about after wine tasting checking out local, public art? While the weather is still agreeable, why not see what our talented Rogue Valley has to offer in the great outdoors? If you are feeling refined after that second glass of pinot grigio, check out these outdoor artistic points of interest. 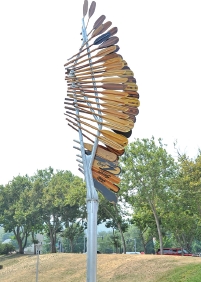 As a rafting hotspot, Rogue Valley residents know that proper, modern paddles are made of fiberglass, or plastic if on a budget. But traditionally, they are made of wood. Wooden paddles are not as popular as they once were, which led Wyoming artist Bland Hoke to repurpose over 100 of them to create three interactive sculptures on Southern Oregon University’s campus this summer. The fanned-out paddles hang above comfy benches—also made of recycled material—that actually rotate.

Alongside Ashland Creek is another “body of water” dubbed “Rio Amistad”, or Friendship River, a tile mosaic. Not only were the tiles made by Illahe Tileworks of Ashland, but local artists Sue Springer and Karen Rycheck created the piece, which was the first public art installed in Ashland in 2006. It is named in honor of Ashland’s sister city, Guanuato, Mexico.

The bears are in town—on almost every street corner, it seems—and they take up a bear-sized amount of space, from the bear version of Harry Potter to the bear decked out for ancient battle. Even in the off season, they all hang out in the Bear Hotel, which also happens to be the home of the Christmas on Mars holiday exhibit (which is rumored to be changing this year, stay tuned).

As for sculptures in the human direction, you can’t miss the three shiny, super-excited fellows along I-5 in front of the Club Northwest. Or just a few blocks away lumbers the city’s resident caveman, complete with a club and  knuckles that nearly brush the ground.

The unfinished scenic mural on the corner of Union Avenue and Ringuette Street isn’t the only wall game in town. Take a step back in time with the Old Time Grants Pass murals located at F and 6th Streets, and an even bigger step with the Indian Mary at 933 7th Street.

You are never alone in the Vogel Plaza, located at 200 E. Main—and for an even greater ego-boost, the male sculpture opposing you at the chessboard seems to be stumped at your killer bishop move. A walk in Alba Park (301 W. Main Street) will warm your heart when you happen upon a boy hugging his pups, in marble and all the way from Italy.

Speaking of parks, Hawthorne Park is getting a full facelift. Especially under the freeway. Murals of local wildlife are currently blossoming on the pillars holding tons of concrete, asphalt and endless zooming vehicles. Each viaduct pillar and support beam side will depict a month out of the year through fish and land animals. Who ever said that hanging out under I-5 wasn’t classy?