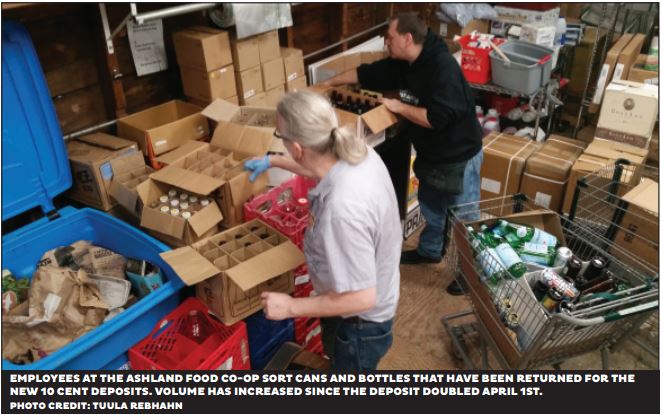 Oregon is known as being a leader in environmental responsibility, whether that means protecting public lands or turning garbage into items that can be used again. But peek under the lid of that comingled recycling cart, and some of these practices are not as neat and clean as they first appear.

For instance, consumers may be feeling a pinch this month at the grocery store after beverage container deposits went up five cents. That’s because legislators, pressured by the beverage distribution industry, made a change to the 1971 Bottle Bill that allowed it to increase deposits if a redemption quota was not met. The landmark Bottle Bill is credited with launching the recycling movement, but has been recently called into question.

Jamie Rosenthal is the Waste Zero Coordinator for Recology, a major waste hauler for the southern Rogue Valley, and she feels that for all the good it did, the Bottle Bill has become outmoded. That’s surprising to hear from someone whose job it is to keep waste out of landfills.

“Most people are now recycling,” explains Rosenthal. “If I have a bottle that I paid 5 or even 10 cents for, I’m probably not going to take it back to the grocery store, I’m just going to say, ‘Oh well, I lost that dime’ and put it in my curbside recycling bin.”

She feels that most busy Oregonians are doing the same thing, and that the beverage distributors’ systems of collecting bottles and hauling them to facilities to be recycled is redundant.

That may be true for bottles collected in Recology’s service areas, but only because the hauler recently created a program that will actually recycle the glass that it picks up, turning it back into new glass containers.

Thought the glass you’ve been carefully rinsing and recycling all these years was already being turned into new containers? It’s a common misconception in Southern Oregon.

Where does glass go?

“Glass is a very, very tricky material to efficiently and effectively recycle,” says Laura Leebrick, a spokesperson for Rogue Disposal. “Every time you handle glass, it breaks.”

Her company, one of four garbage and recycling haulers servicing the Rogue Valley, has a special challenge: All their recycling is comingled, meaning that glass jars and bottles are thrown in the same bin and picked up in the same truck as plastic, paper, aluminum and the rest.

“By the time glass makes it to the floor of the processing facility, it’s become part of the contaminants on the floor that get swept up at the end of the day,” says Leebrick, who admits that all of this trash ends up going into the landfill.

But wait—what happens to the glass that actually stays whole and gets sorted appropriately? For three of the four waste haulers the Messenger spoke to, the answer was the same: It goes to Dry Creek Landfill near Eagle Point.

How is that recycling? It’s not—it’s actually reuse. The Oregon Department of Environmental Quality condones the use of crushed glass in place of rock aggregate that would otherwise be used. It’s an Approved Reuse.

Rogue Disposal, which manages Dry Creek Landfill, attests that all glass collected at the facility is crushed and used for the purpose of cushioning pipe laid through the landfill. Not only does this save the company money, it also prevents and gravel from being mined for this purpose.

From Reuse to Recycle

Jamie Rosenthal, however, is not convinced that this is the highest and best use of glass collected in the Rogue Valley. That’s why Recology has contracted with a company called Glass to Glass, which handles the conversion of used glass containers to new. Six times a month, they load up a truck with collected glass, and it is driven to the Portland sorting facility.

When asked why they don’t do the same, both Southern Oregon Sanitation and Rogue Disposal cited carbon footprints, with a third hauler, Republic Services, declining to comment.

“It’s a long way to haul a very heavy material,” says Leebrick. “If the goal of recycling is to benefit the environment, and in this day and age it’s all about greenhouse gas emissions. There’s a tipping point.”

While Rogue Disposal and others seek to reduce the added work and carbon emissions caused by hauling bottles to recycling centers separately, Oregon’s Bottle Bill attempts to make this practice the norm by encouraging bottle redemption. Hence the increase in the price on the head of your beer bottle.

There’s another cloud over the Bottle Bill: Unlike most other states that have implemented similar legislation, Oregon’s bottle deposits don’t actually go toward any public programs if they’re not redeemed. That ten cents that Rosenthal says she’d rather put into her comingle cart, is another ten cents earned by beverage distributors. According to a recent investigation by the Willamette Week, those unclaimed deposits will add up to an additional $30 million with the 5-cent-per-bottle increase that just went into effect.

Beverage distributors have not disclosed what they plan on doing with the extra revenue. Meanwhile, Rogue Disposal plans to reassess whether or not its recycling trucks should pick up and haul away glass at all. Soon, residents of a large part of the Rogue Valley, including Medford, may just be tossing in glass with the rest of the garbage headed to the landfill.

Feeling a bit broken up about it? Grab a refillable growler and head to your nearest brewery. Out of the three R’s, “reduce” is still the one that has a chance of saving the planet.