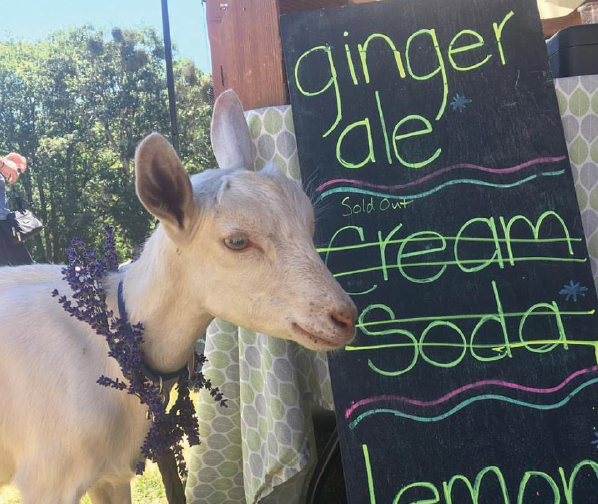 From The Earth Soda lives up to its name—all organic ingredients, fresh from the farm and keg. A new vendor at local farmer’s markets, From The Earth also has expanded to Immortal Spirits, Buttercloud, Bricktowne Brewing Co, and Café 116. And, in the process, this Ashland company is setting a standard for craft sodas, with ginger ale, cream soda, and lemon soda as the staples, and sensational seasonal flavors on rotation as well (think blood orange and peach).

“Quality of ingredients is super important. Ginger for the ginger ale comes from a friend’s farm in Costa Rica,” says Cat Lipsky, owner and brewer. And that familiarity and connection to the ingredients is important, according to Lipsky, because she can vet for quality and ethical farming practices. She also adds that, “The Madagascar vanilla is free trade and organic.” In fact, all of the ingredients in Lipsky’s sodas are organic, even the cane sugar.

“We use half the amount of sugar too,” she adds, making the soda great for kids and mixed drinks alike.

Along with quality ingredients, From The Earth utilizes refillable growlers for environmentally conscious packaging. Buy a soda at the market, and bring back the trendy growler bottle to try a new flavor the next week. Smaller, single use glass bottles are available as well. Getting soda from a keg keeps it fresher and more effervescent—the ingredients stay more alive, so to speak.

Wine making was Lipsky’s original calling. As a student studying beverage management Lipsky says she took a beer brewing class in her final years of college that, “lit a fire.” After graduation, she headed west to start her own home-brewing supply company. A brewer who has won awards for her unique beers, Lipsky eventually decided to settle in Ashland where she’s been busy getting her business off the ground.

In a region saturated with beer makers and breweries, Lipsky is happy to fill the soda niche. However, beer is her first love. Lipsky says someday she hopes to have her own brewery, where she can expand to make beer as well.

Before delving into soda making, Lipsky says she used to experiment brewing with herbs like rosemary and sage, something she’s eager to get back to. She’d like to eventually offer beer that is typical of the area, with a fun twist. For now, soda is the stepping-stone to beer making that Lipsky is putting all her energy towards.

“I’d love to have a taproom, and be at growler fill stations,” Lipsky says, as she’s brewing out of a shared kitchen in Ashland at the moment.

Dedicated to deliciousness as well as quality, Lipsky’s goals also include someday being a ‘farm-to-bottle’ company. Also on Lipsky’s horizon is growing her own ingredients—like mint, hops, and ginger.

Currently, From The Earth soda can be found at the Thursday market in Medford, the Tuesday market in Ashland, and the Sunday market in Jacksonville. As well, bottles can be purchased at Immortal Spirits, Bricktowne Brewing Co., and Buttercloud in Medford, and Café 116 in Ashland. Lispky is also working on getting more of her soda on taps at growler fill stations in the Rogue Valley.