Home»Culture»From Gold to Whitewater: SOPTV Gives a Glimpse into the Town of Gold Hill Through Their “Our Town” Project
Culture/Screen

From Gold to Whitewater: SOPTV Gives a Glimpse into the Town of Gold Hill Through Their “Our Town” Project 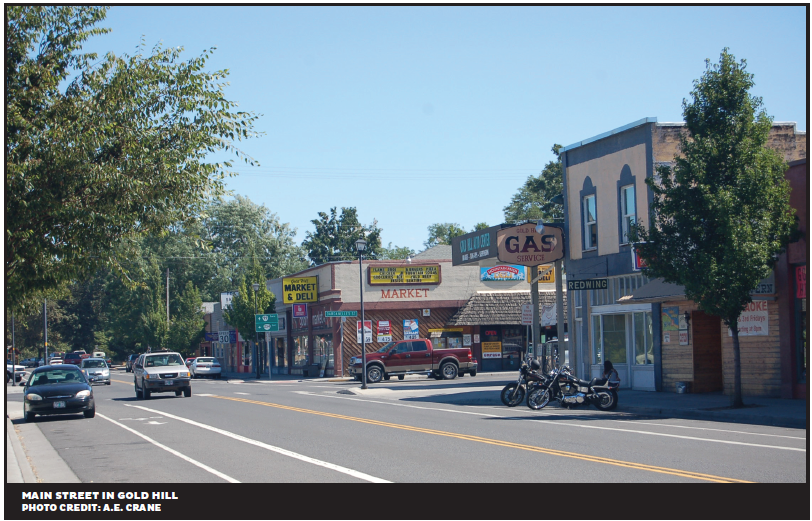 While many fly by the little town of Gold Hill on Interstate-5 without a second thought, residents of the historic town tell the story of its past and the big plans for the future as the first installment of a new series on Southern Oregon Public Television, “Our Town,” which premiered earlier this week and will re-air on September 10 at 8 pm.

“We hope that the viewer response is strong,” says Executive Producer of the show Jeff LeBeau. “We are hoping that other towns in our area reach out and want to make their own. They are essentially co-producers on this. They are on-camera talent and researchers; this is really their town.”

The series is based off of a similar one in Pennsylvania, though LeBeau says with the professionals from SOPTV assisting the residents, the production quality is much higher.

While Gold hill mayor Jan Fish doesn’t seem at home in front of the camera, she bravely hosts the 50-minute piece, transitioning between historical recaps and current town attractions. Narrators range from white-bearded miners to fishermen to young students—all residents of Gold Hill.

The story is told historically, with plenty of old photos and even black-and-white film interspersed with gorgeous aerials and simple shots of the downtown area. Though Gold Hill wasn’t officially established until 1895, the seeds were planted when the railroad was built in the mid-1800s, and the gold rush brought people in droves.

The actual original Gold Hill mine is across the Rogue River from the town itself, which is where the first famous gold was struck, “the Gold Hill Pocket,” in the late 1800s. In the documentary, author/historian Gold Hill resident, Linda Genaw says about that time, “It was reported in the newspaper, ‘People were picking up gold like turkeys picking up corn.’”

While the town has only grown in population since then (peaking at 1,220 in 2015), the economic growth of the town hasn’t fully recovered since the Great Depression. The future of the town, says Steve Kiesling, President of the Gold Hill White Water Center, is in the river.

They are in the process of developing a “whitewater park,” which is like a skateboard park for kayakers and rafters along the wide array of rapids that cover about a mile of river alongside Gold Hill, ranging in Class from 1 (flatwater) to 6 (“unrunnable”).

“The future of Gold Hill is a paddling community,” says Kiesling. “We aren’t charging people to use the river, but to bring in businesses.”

Other thriving and unique businesses in Gold Hill include: 300-acre Del Rio Winery, Rogue Valley Zipline Adventure and the Oregon Vortex and House of Mystery, a mysterious experience that has been in business since 1930, about which author and historian Elena Cooper says, “You have to come see it to believe it.”

Gold Hill boasts over 80 acres of park land, many of which are alongside the Rogue River, so the  dream of the river running the town just might become a reality. Fishing is also a big draw to the area, especially after the Gold Ray Dam was removed in 2008, creating 157 miles of free flowing river, from the Lost Creek Dam to the Pacific Ocean, making that stretch of the Rogue River one of the largest free flowing sections of river in the nation.

Another important part of Gold Hill’s heritage is the Native American population, which hold an annual Sacred Salmon Ceremony every year, celebrating the bounty of the river by preparing and eating salmon, and sending divers down to the bottom of the river with the skin and bones that we leftover on cedar branches, which are also sacred, to return what was not used back to the salmon.

“We are teaching reciprocity, how to give back,” says resident Agnes Baker Pilgrim “Taowyhee, Morningstar.” “If we do these things in a good way, then the Creator blesses us in the same manner.” She added that the same ceremony on the Applegate River led to a large increase in the salmon population there.

From Gold to Whitewater: SOPTV Gives a Glimpse into the Town of Gold Hill Through Their “Our Town” Project