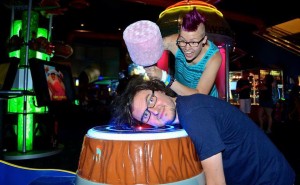 If it wasn’t obvious, the recipe wasn’t for the food, but Escargot, the genre-straddling debut from Tempe-based duo Snailmate, who will soon be coming through the Rogue Valley for a pair of shows at Club 66 and Johnny B’s.

“Well, I don’t think electro punk was a conscious decision,” says synth wiz and vocalist Kalen Landers. “My roots are in hip hop, and Ariel’s are more in hard rock and jazz. Electropunk just kind of came out me getting synthesizers and exploring the noise that we both naturally made. It just happened to be fast and loud and heavy.

“We both don’t have the most beautiful voices,” says Landers. “So it comes off a bit punky.”

But it also comes off a lot electro, and with Landers voice—the emotive range of which he really isn’t giving himself enough credit for—shimmying effortlessly back and forth between punchy raps, an evil lounge croon and punk snarls, it’s a powerful and unique blend. And unlike many bands going the electronic route, Snailmate doesn’t bother with laptops or backing tracks, fulfilling the Bill O’Reilly commandment of doing it live.

“I play all on feeling,” says Ariel Monet. “If it’s all done live, then I can feel more. If we added backing tracks, I’d have to play to a click, instead of being able to feel it out based on the audience.”

And audiences are something Snailmate has seen a lot of. The band has spent at least two our of every four weeks since April on the road, and is currently on a three-month trip around the U.S. That sort of touring schedule could break a lot of bands, but not Snailmate.

“We live together, we work together, we’re dating,” says Landers. “So we’re used to sharing confined spaces and seeing each other at our worst. If you don’t mind smelling bad, it’s really easy if you have a good attitude about it.”

“Any sort of trials and discomfort of touring is completely secondary to the highs that we’ve experienced from playing every night,” says Monet.

They’re enjoying it so much, the band even wants to spread that love.

“If any band reading this anywhere needs help booking a show in Arizona, we’re glad to help them out,” says Monet.

But while Snailmate is glad to help other bands book a show in Arizona, they might not be able to make it there themselves.

“The second we get home, we’re going to record and then leave again,” says Monet.