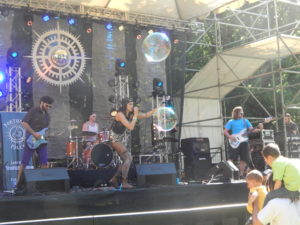 The independent music scene has produced an abundance of crossover genres and odd polysyllabic descriptors. But even with all these newfound labels some bands still don’t fit into a neat little package, like Fortune’s Folly. The Eugene band’s sound compacts all the riffy goodness expected from a traditional jam band into a catchy pop package. Though it may be difficult to put a finger on which genre they belong to, you can be sure they’ll be ripping it up Friday, Sept., 9 at Howiee’s in Medford.

This visit to the Rogue Valley also marks a homecoming for the group’s frontwoman, Calysta Cheyenne, who grew up in Southern Oregon and attended Ashland High School. This show should prove to be a treat for fans of blues and danceable pop alike, because despite the band’s meager four-piece lineup, each member brings to the table a litany of influence resulting in a rich and complex sound.

“Every time we try to define ourselves and write down our genre it always becomes a laundry list,” says Cheyenne. “It’s like ‘how can we narrow this down to one thing.’ Technically I think we are very pop based in our writing style, our songs are four to five minutes and definitely hook based with a focus on the chorus. then we have lots of elements of soulfulness, funk, and jazz even. I think we’ve decided we’re alt-rock.”

Pop elements aside, Fortune’s Folly are not afraid to make less than subtle winks to their blues and jazz roots. Cheyenne’s sultry vocal melodies are propped up by a defining funk foundation provided by bassist Jesse Sanchez, and the smooth blues lickings of Ira Manzie.

“I know that’s what I was raised on,” says Cheyenne. “It has that element of nostalgia, where people are missing hearing those sounds that you grew up with. I think there’s always a desire for what’s not right in your face. You know you turn on the radio and there’s this kind of pop music in your face, then you go to a classic station and you get all the old stuff. Now bands like the Alabama Shakes, and groups that are getting super popular bring those vintage sounds back into the hip scene.”

Though Fortune’s Folly is a relatively young project they’re looking to move forward with a new EP set for release Halloween weekend. Fortune’s Folly can be sure they won’t be going it alone thanks to their devoted and sizable audience on the Eugene scene.

“It’s really cool being able to be in a band here,” says Cheyenne. “The fans are really cool people and it’s a blessing to have people who show up to every show, our kind of diehard fans. Seeing their faces and having people sing along with the lyrics literally brings tears to my eyes and is what keeps us going.”