Follow the Black Road: An Interview With Director Gary Lundgren

Last July, Messenger writer Ryan Forsythe appeared as an extra in the locally made and set film Black Road, which premiered in Beverly Hills on October 14. Through rain, wind and technical difficulties, he did his due diligence as an end-of-the-world-hippie-zombie of sorts, And now Black Road is complete, and ready to show the world a possible future version of the fabled State of Jefferson. The Ashland premiere at the Varsity Theater is on October 22. We caught up with director Gary Lundgren, who is also the director of Calvin Marshall and Redwood Highway. 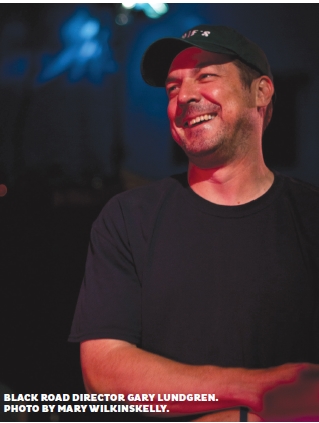 RVM: Can you give a brief synopsis of Black Road?

GL: Black Road is a near-future, noir thriller set in the free State of Jefferson. The story follows an ex-military drifter with AI intelligence embedded in his head. He’s hired to protect a mysterious woman from her ex—a tycoon who’s up to some bad things.

RVM: How long has Black Road taken to make in total?
L: We shot it last summer. So about a year.
RVM: What is your most memorable moment from the filming process?

GL: Most memorable was probably shooting the finale out on the Oregon Coast. But my favorite part was just collaborating with our talented cast and crew. We always do our best to keep things fun and limit the stress on set. Post production was also big on this movie. Our team was amazing and really put in a lot of hours. I think we’re all grateful to be finished.
RVM: What was your motivation for making this “neo-noir thriller”?

GL: I’ve always loved film noir which came along after World War II. All those jaded protagonists trying to survive in a dark world. Black Road is inspired by a similar kind of desperation. As an ex-military cyborg, Dylan has all the potential in the world, but ends up an outcast trying to survive in a new society that over-promises and under-delivers. We’ve made a film that is unsettling and entertaining while exploring our need for stability, happiness and meaning.

GL: When Dylan and Sterling talk at his ranch the first time in Act 2. Things are pleasant at first but they gradually grow strange and dangerous. No spoilers, but it was fun to shoot and edit. And it was especially cool to see all the visual effects come together for this sequence that our VFX artist Pete Evans created.

RVM: What changed for your vision for the film as it was being made?

L: Budgetary constraints and limited shooting days always mess with your decisions on the fly. With that said, this is our third feature so we knew what we were up against. I think it’s pretty close to what we set out to make.

RVM: How does it compare for you to your past work?

L: Calvin Marshall and Redwood Highway were more or less straight dramas. With Black Road, we wanted to make an original thriller. In the end, I think we’ve made a dramatic thriller. What the central characters want and how they’re evolving emotionally as human beings is always the most important thing to me as a filmmaker.

RVM: What’s next for you?

L: Joma Films has a slate of movies in development but the next one will hopefully be this absurd comedy we’ve been writing that skewers the northwest.
RVM: What is your favorite movie?

Follow the Black Road: An Interview With Director Gary Lundgren