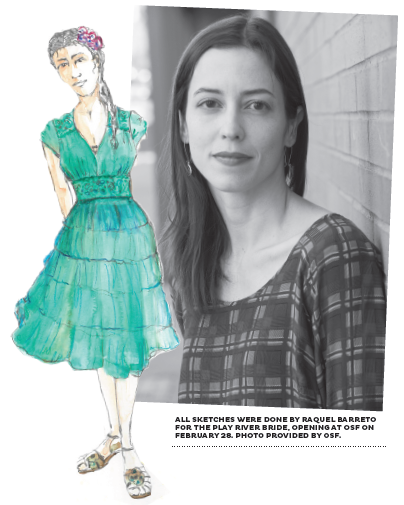 If breeches get you excited and you don’t leave the house without an embroidered handkerchief, it would logically follow that the Oregon Shakespeare Festival is not only about drama on stage for you, but a chance to check out the fashions gone by.

But since pantaloons and ruffs aren’t available off the rack the mall, they need creation out of thin air. Enter OSF Costume Designer Raquel Barreto. Though she wasn’t tasked with Elizabethan garb this time around, Barreto enters her third season with OSF tackling two world premieres: The River Bride, opening February 28 and Roe, opening April 20.

Barreto has been designing professionally since 2005, though she has mostly designed for shows with music, like operas and ballets.

“I do like it all,” she admits. “More and more there is blurring. I designed for Pericles; there was a fair amount of music in that. I love the text. I love the literature. There is something more palpable to work with in theaters. It can be challenging working with choreographers. OSF is good at pairing designers with directors; they really try to create a dynamic artistic community.”

River Bride is takes place in the Amazon, and centers around two sisters and a mysterious stranger, along with the river itself.

“River Bride is small in scale with fewer characters,” says Barreto. “It doesn’t have a specific time period. It is set in the Amazon, but we don’t know when or specifically where so there is room for imagination. And with River Bride, the question is how much is a fantasy world and how much is reality. Also, having the playwright in the room is fantastic and daunting. So often you are working with a dramaturg and you have to answer the questions yourself.”

Roe tells the story of the polarizing Supreme Court case on abortion, Roe v. Wade, decided in 1973, and the its remarkable after story.

“With Roe, it is even more challenging,” admits Barreto. “The characters are based on actual people. There is a lot of research to be done. It plays with how history is told and retold. It is about making sense of that, and finding a style that is right.”

But it isn’t just Barreto designing and creating. She says that anywhere between 25 and 80 people are working in the costume shop (talk about many hands!). But before a costume is actually made, months of meetings, discussions, images, databases and yes, Pinterest pins, goes into the creative process. Check out Barreto’s sketches of River Bride costumes on the cover.

It was her original love of drawing that made her want to pursue fashion design, but the merchandising aspect turned her off.

“People don’t get to be that creative,” she says of fashion design. “In theater, you have many roles. You are studying literature and history. You immerse yourself in a period or place.”

After getting her Masters of Fine Arts from UC San Diego, Baretto taught at UC Berkeley and UCLA, which gave her a different kind of challenge.

“Having to articulate how to think about design to other people [is a challenge],” she says. “When people ask you ‘why did you choose a color,’ you cannot just say ‘because.’ You have to look at it from the audience’s perspective, and the story helps you articulate to your collaborators. It really helps my design process.”

Her advice if this sounds like your cup of tea? Watch plays!

“See a lot of performances and shows, onscreen and live,” she says. “Have a vocabulary to talk about it. The American Theater scene is becoming more professional. It is good to have a BFA. Find a mentor; someone you enjoy working with. Work on your relationship with people you go to school with in your program. And take time off after school and work in theater in any capacity and make sure you like it.”