Home»News»Finding Housing For Could Get Easier For Students
News

Finding Housing For Could Get Easier For Students 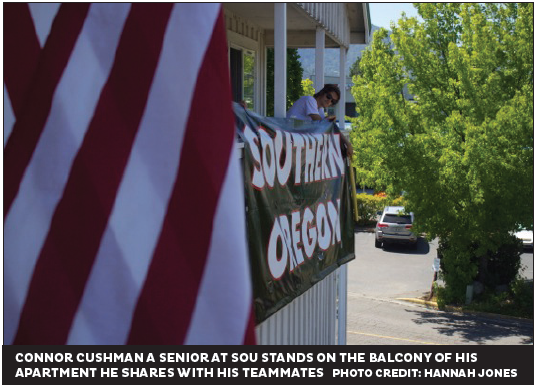 It is not new news that the housing market in Ashland is tight, with a reported one or two percent vacancy rates. And, as first-time renters without rental history and often without full-time jobs, students and young residents are often shunned by landlords.

But, starting in September, students will receive some legal protections against unfair housing and rental practices. For the past three years—almost enough time for a person to earn a college degree—a group of college students have been agitating for these legal protections. And, last week, they finally found success. Starting in September, according to the new ordinance approved by Ashland City Council, it will be illegal in Ashland to deny someone housing based solely on their age, mitigating the possibility of student renters being discriminated against simply because they are young.

“If a student feels that they have been discriminated against because they’re 18, 19, and it’s an age issue […] they will be able to take legal recourse,” explained Megan Mercier, a senior at Southern Oregon University (SOU) and who serves as liaison between the Ashland Housing and Human Services Commission and Associated Students of Southern Oregon University (ASSOU).

The fair housing campaign was initiated in 2013 by the ASSOU in response to sincere concerns about students being pushed out of housing opportunities. It took three years, but finally made headway this summer as Ashland City Council passed an ordinance adding age and domestic partnership as a protected class to Ashland’s existing fair housing ordinance at Tuesday’s city council meeting.

“The fact that students organizing around fair housing has continued over several years shows how deeply felt the issue is,” said Kristi Wright, a SOU graduate who aided in the early stages of communication between ASSOU and city council.

Before it was amended, renters were protected under the original ordinance from discrimination based on their race, color, origin, gender, religion, source of income, disabilities, family status, sex, and sexual orientation. With the new addition, it is now unlawful to deny someone housing because of his or her age. Though this falls short of ASSOUs original goal to have students as a protected class under occupation—a more stringent legal protection—they saw it as a small victory for those affected by unfair discrimination and renter biases.

“It was a lot of work and I feel that they were really trying to ensure that the best solution was being found,” said Mercier, referring to the council’s final proposal of an ordinance.

In February, student government’s Fair Housing Campaign gained momentum, calling for testimonies from students who felt they had been discriminated against by landlords or property management companies. Officials collected a strong chorus of concerns, with 350 petitions from students; in turn, these were presented to the council to bring further awareness of the issue. Included were nearly fifty surveys collected from individuals, all who claimed to have experience frustrations finding housing because they were students. In some cases they were told directly by the landlord or owner that they would not rent to them.

At a study session in March the council requested feedback from landlords, some who claimed that such discriminatory practices reported by students was due to their lack of qualifying rental history, credit scores, income, or security measures to cover possible property damage. For students, many who are first-time renters and also not full-time employed, these requirements may be a tough barrier to clear. In response, language was included in the ordinance that qualified grants, scholarships, or loans as an appropriate source of income that could be listed on a rental application.

“If a landlord says ‘oh you only have financial aid, and I only rent to people who have legitimate sources of income,’ that person will also have options for legal recourse,” said Mercier.

According to the study session meeting minutes, there also was discussion about working with the university to recognize dormitory history as rental history and even creating an application that could rate student renters.

“I do think it is a reasonable step forward to include age and domestic partnership within the context of our ordinances,” said Council Member Pam Marsh. But, she added, “I do not think this will solve our housing issues,” attributing those to Ashland’s extremely low vacancy rate.

Finding Housing For Could Get Easier For Students